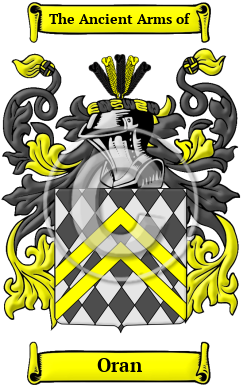 Early Origins of the Oran family

The surname Oran was first found in Aberdeenshire (Gaelic: Siorrachd Obar Dheathain), a historic county, and present day Council Area of Aberdeen, located in the Grampian region of northeastern Scotland, where they held a family seat in their territories. The Pictish influence on Scottish history diminished after Kenneth Macalpine became King of all Scotland. But those east coast families still played an important role in government and were more accessible to Government than their western highland counterparts. Allegiances were important to Scottish middle age survival. Later they held a family seat in the parish Kennay and Henry Owrum was elected a councillor of Aberdeen in 1479.

The name is derived from Ormr, 'serpent,' a favorite Old Norse personal name. "Orm or Honn was sacerdos of Hume between 1153-1156. Orm filius Eilaf witnessed King David's great charter to Melrose Abbey, a. 1153. John, son of Orm, was one of the witnesses to Waldeve's charter of Dundas to Helias, son of Huctred, and is probably the John filius Horum who witnessed a charter by EsChina uxor Walteri. Orm was father of John, lord of Hunum (Hownam), c. 1164-1174, and William filius Orm witnessed a cherter by Dovenald, abbe de Brechin, c. 1204-1211." [1]

Early History of the Oran family

More information is included under the topic Early Oran Notables in all our PDF Extended History products and printed products wherever possible.

Oran migration to the United States +

Oran Settlers in United States in the 17th Century

Oran Settlers in United States in the 18th Century

Oran Settlers in Australia in the 19th Century

Oran Settlers in New Zealand in the 19th Century