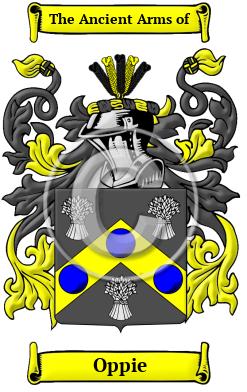 The Oppie surname was created from the medieval personal names Oppy, or Obby, which were turn short forms of personal names such as Osborn, Osbert, and Osbald.

Early Origins of the Oppie family

The surname Oppie was first found in Cornwall where they held a family seat as Lords of the Manor of Penhargard.

"The manor of Lan-car, Lancarfe, or Lancoff, which was held of the honour of Bodmin, or of St. Petroc, was, in the reign of Richard II. in the Whalesborowe family, who then held it under the Bevilles, and retained it for several succeeding generations. In the fifteenth century the barton belonging to this manor, was in the family of Opie, from whom it passed successively to the Crossmans and Bullocks." [1]

Early History of the Oppie family

This web page shows only a small excerpt of our Oppie research. Another 102 words (7 lines of text) are included under the topic Early Oppie History in all our PDF Extended History products and printed products wherever possible.

More information is included under the topic Early Oppie Notables in all our PDF Extended History products and printed products wherever possible.

Oppie Settlers in Australia in the 19th Century