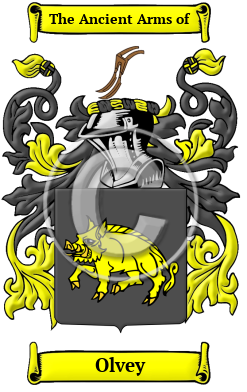 It was among those Anglo-Saxon tribes that once ruled over Britain that the name Olvey was formed. The name was derived from the Germanic personal name Aldway which was derived from Aeoelwig, which meant noble war.

Early Origins of the Olvey family

The surname Olvey was first found in Suffolk where Godric filius Ælfuuii was listed at Bury St Edmunds c.1095. Later, the singular Alfwy was registered in Berkshire in 1212 and in the same year, Swein and William Alvi were registered in the Curia Regis Rolls for Oxfordshire. [1] This county would become a stronghold for the family as the Hundredorum Rolls of 1273 had several early spellings of the name listed: Robert Alewi; Aldwy ad Fontem; William Aldwy and Walter Elwy. [2]

About the same time, the source the History of Norfolk notes: "Roger Bigot had a small tenure at the Survey, held by a freeman of Alwi, in King Edward's reign." [3]

Early History of the Olvey family

Until the dictionary, an invention of only the last few hundred years, the English language lacked any comprehensive system of spelling rules. Consequently, spelling variations in names are frequently found in early Anglo-Saxon and later Anglo-Norman documents. One person's name was often spelled several different ways over a lifetime. The recorded variations of Olvey include Alvey, Alvay, Alvy, Alvie, Allvey, Elvy, Elvey, Aelfuuii, Alvi, Alfy, Elphey, Alfwy, Aluy, Eluy and many more.

Distinguished members of the family include William Alvi, a prominent 13th century landholder in Oxfordshire. Richard Alvey (died 1584), was an English clergyman, Master of the Temple Church. He received his education at Cambridge, where he graduated B.A. in 1530 and M.A. in 1533. He was admitted a fellow of St. John's College...
Another 52 words (4 lines of text) are included under the topic Early Olvey Notables in all our PDF Extended History products and printed products wherever possible.

Migration of the Olvey family

Thousands of English families boarded ships sailing to the New World in the hope of escaping the unrest found in England at this time. Although the search for opportunity and freedom from persecution abroad took the lives of many because of the cramped conditions and unsanitary nature of the vessels, the opportunity perceived in the growing colonies of North America beckoned. Many of the settlers who survived the journey went on to make important contributions to the transplanted cultures of their adopted countries. The Olvey were among these contributors, for they have been located in early North American records: Samuel Alvey, who sailed to New York in 1822; and Thomas Alvey to Philadelphia 1873.