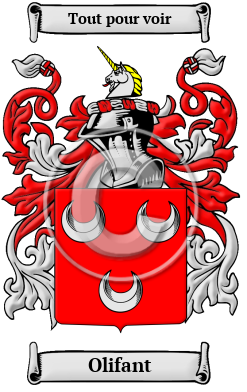 The Scottish Olifant surname is known to derive from "Olifant (derived from elephas) [which] signifies an elephant's tusk mounted as a horn, which was one of the ancient symbols of command." [1]

Early Origins of the Olifant family

The surname Olifant was first found in Perthshire (Gaelic: Siorrachd Pheairt) former county in the present day Council Area of Perth and Kinross, located in central Scotland. "The first of the descendants of this Norman, occurring in the public records, was David Olifard, who served in the army of King Stephen in 1141. A conspiracy was formed against the Empress Maud, who escaped from Winchester, attended by David I. Surrounded by the enemy, the Scottish King owed his safety to the exertions of his godson Olifard, who, although in the adverse party, aided his Royal opponent. In recompense, the rescued Monarch gave to his preserver, who settled in North Britain, the Lands of Crailing and Smallham in Roxburghshire, and conferred on him the dignified office of Justiciary. Thus was established the famous family of Oliphant, so distinguished in the annals of Scotland. " [3]

Early History of the Olifant family

Notable among the family at this time was Laurence Oliphant (1691-1767) was a Jacobite army officer[1] who belonged to a branch settled at Findo Gask in Perthshire, Scotland. He took part in the rising of 1715, and both he and his...
Another 41 words (3 lines of text) are included under the topic Early Olifant Notables in all our PDF Extended History products and printed products wherever possible.

In South Africa, the name Olifant is the 488th most popular surname with an estimated 14,676 people with that name. [4]

Olifant Settlers in Australia in the 19th Century