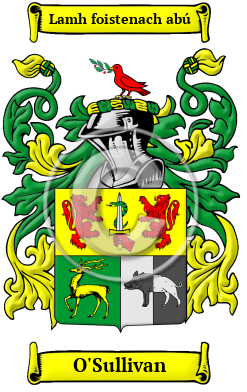 The old Gaelic name used by the O'Sullivan family in Ireland was O Suileabhain, which is partially derived from the word "suil," which means "eye." The surname probably means either one-eyed or hawk-eyed.

Early Origins of the O'Sullivan family

The surname O'Sullivan was first found in the territory of Cahir in County Tipperary (Irish: Thiobraid Árann), established in the 13th century in South-central Ireland, in the province of Munster. The Sullivan spelling is by far the most common name in Munster, and is predominantly found in the counties of Cork and Kerry, with a smaller but still significant population in County Limerick. [1]

Early History of the O'Sullivan family

Official documents, crafted by early scribes and church officials, primarily contained names that were spelled according to their pronunciation. This lead to the problem of one name being recorded under several different variations, creating an illusion that a single person was many people. Among the many spelling variations of the surname O'Sullivan that are preserved in the archival documents of the time are O'Sullivan, Sullivan and others.

Notable amongst the family name at this time was Donall O'Sullivan Beare (1560-1618), Chief of the sept of his name in the district of Beare, co. Cork, who "engaged actively in the hostile movements in Ireland against the government of England in the last years of Queen Elizabeth." [2] Phillip O'Sullivan Beare (1590-1660), was a soldier in the Spanish army who is best remembered as a historian; and Colonel John O'Sullivan (b. 1700) was a companion to the "Young Pretender" who led the Irish Brigade at Culloden in 1745. Owen Roe O'Sulliavan (1700?-1784) was Gaelic poet, called in Irish Eoghan Ruadh, or Red-haired...
Another 103 words (7 lines of text) are included under the topic Early O'Sullivan Notables in all our PDF Extended History products and printed products wherever possible.

O'Sullivan migration to the United States +

In the 18th and 19th centuries hundreds of thousands of Irish people immigrated to North American shores. The early settlers were enticed by the promise of their own land, but they were moderately well off in Ireland when they decided to emigrate. Therefore, they were merely carrying out a long and carefully thought out decision. The 1840s saw the emergence of a very different trend: thousands of extremely desperate people crammed into passenger boats hoping to find any type of opportunity. The Irish of this decade had seen their homeland severely stricken by crop failures which resulted in widespread disease and starvation. At whatever time the Irish immigrants came to North America, they were instrumental in the rapid development of the emerging nations of the United States and what would become known as Canada. An exhaustive search of passenger and immigration lists has revealed many persons bearing the name O'Sullivan, or one of its variants:

O'Sullivan Settlers in United States in the 19th Century

O'Sullivan Settlers in Canada in the 19th Century

O'Sullivan Settlers in Australia in the 19th Century

O'Sullivan Settlers in New Zealand in the 19th Century

Historic Events for the O'Sullivan family +