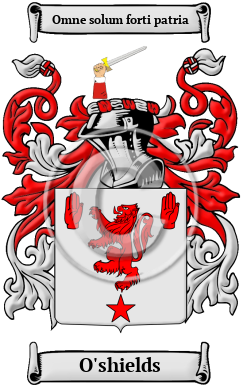 This name was anglicized from Ó Siadhail in Gaelic, meaning an 'ancestor of Siadhail' (the prefix O denotes 'grandfather of'). Siadhail has been translated to mean 'sloth' or 'sluggishness'. As this name is descriptive of its original bearer, it is considered to be a nickname. However, many Irish of this name originally came from England or Scotland where the name Shields is derived from an Old English word meaning 'shed' or 'hut' - a somewhat more flattering meaning.

Early Origins of the O'shields family

The surname O'shields was first found in the Ulster region counties of Donegal, Derry, Antrim and Down. This family are reputed to be descendents of the great King Niall of the Nine Hostages.

Early History of the O'shields family

Notable amongst the family name at this time was Luke O'Shiell (1677-1745), Irish Jacobite, born in Dublin who emigrated to Nantes, France after the Irish defeat, father of Mary O'Shiell, a French-Irish businessperson in Nantes and her sisters Agnés O'Shiell and Anne O'Shiell, founder of the family manor of the O'Shiell, Manoir de la Placelière, which became the gathering place of the large Irish colony in Nantes; Michael...
Another 68 words (5 lines of text) are included under the topic Early O'shields Notables in all our PDF Extended History products and printed products wherever possible.

In the United States, the name O'shields is the 14,519th most popular surname with an estimated 2,487 people with that name. [1]

Migration of the O'shields family