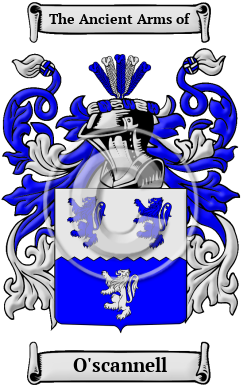 Today's Irish surnames are underpinned by a multitude of rich histories. The name O'scannell originally appeared in Gaelic as O Scannlain or Mac Scannlain, which are both derived from the word "scannal," which means "contention."

Early Origins of the O'scannell family

The surname O'scannell was first found in County Louth (Irish: Lú) the smallest county in Ireland, located on the East coast, in the Province of Leinster. "The Mac Scanlans were a sept of Louth, from whom the ancient locality of Bally Mac Scanlan took its name. The first of the family mentioned by D'Alton is Patrick O'Scanlan, who was made archbishop or Armagh in 1261. " [1] According to O'Hart, the family claim descent from the Heremon Kings of Ireland, more specifically through the O'Shaughnessey pedigree as Tuadan, brother of Duach was the ancestor of O'Scannla which is Anglicized as Scanlan. [2] However, MacLysaght claims that there are two quite distinct septs; the O Scannlain of Munster and MacScannlain of Louth. The latter claimed Bally Mac Scanlan (Ballymacscanlan) as their ancient homeland. He continues pointing out that there are six places names Ballymacscanlan throughout Ireland eluding to the family's widespread distribution. [3]

Early History of the O'scannell family

This web page shows only a small excerpt of our O'scannell research. Another 77 words (6 lines of text) covering the years 127 and 1272 are included under the topic Early O'scannell History in all our PDF Extended History products and printed products wherever possible.

Before widespread literacy came to Ireland, a name was often recorded under several different variations during the life of its bearer. Accordingly, numerous spelling variations were revealed in the search for the origin of the name O'scannell family name. Variations found include Scanlan, O'Scannell, O'Scanlan, O'Scanlon, MacScanlan, Scanlin and many more.

More information is included under the topic Early O'scannell Notables in all our PDF Extended History products and printed products wherever possible.

Migration of the O'scannell family

To escape the religious and political discrimination they experienced primarily at the hands of the English, thousands of Irish left their homeland in the 19th century. These migrants typically settled in communities throughout the East Coast of North America, but also joined the wagon trains moving out to the Midwest. Ironically, when the American War of Independence began, many Irish settlers took the side of England, and at the war's conclusion moved north to Canada. These United Empire Loyalists, were granted land along the St. Lawrence River and the Niagara Peninsula. Other Irish immigrants settled in Newfoundland, the Ottawa Valley, New Brunswick and Nova Scotia. The greatest influx of Irish immigrants, however, came to North America during the Great Potato Famine of the late 1840s. Thousands left Ireland at this time for North America and Australia. Many of those numbers, however, did not live through the long sea passage. These Irish settlers to North America were immediately put to work building railroads, coal mines, bridges, and canals. Irish settlers made an inestimable contribution to the building of the New World. Early North American immigration records have revealed a number of people bearing the Irish name O'scannell or a variant listed above, including: Anne, Charles, Daniel, Denis, Edward, James, John, Michael, Patrick, Peter, Thomas, Timothy and William Scanlan, who all arrived in Philadelphia between 1800 and 1870.