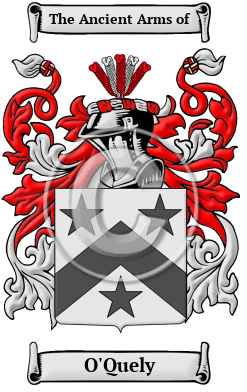 There are a multitude of ancient meanings and variations associated with the Irish surnames that are now common throughout the modern world. The original Gaelic form of the name O'Quely is O Cadhla, which is derived from the word "cadhla," which means "graceful." [1]

Early Origins of the O'Quely family

The surname O'Quely was first found in County Waterford (Irish: Port Láirge), anciently the Deise region, on the South coast of Ireland in the Province of Munster, where they held a family seat from very ancient times. They are of the ancient kingdom of Ossory (Osraighe), conjecturally descended from the Kings and gentry of Ossory, the progenitor of which was Conla, the second son of Breasal Breac, King of Leinster, and descended to Ceallach who was ancestor of Teige McGillpatrick. [2]

Early History of the O'Quely family

This web page shows only a small excerpt of our O'Quely research. Another 152 words (11 lines of text) covering the years 1190, 1630, 1645, 1689 and 1863 are included under the topic Early O'Quely History in all our PDF Extended History products and printed products wherever possible.

Many variations of the name O'Quely were found in archives from the Middle Ages. Names during the Middle Ages were typically recorded as they sounded and in many cases, one's surname spelling changed with each record.The spelling and language in which the people's names were recorded was often up to the individual scribe. Variations of the name O'Quely found include Keily, Keiley, Keilly, Kiley, Kily, Kiely, Kieley, Keeley, Keely, Queally, Quealy, Quelly, O'Keily, O'Keilly, O'Kiely and many more.

More information is included under the topic Early O'Quely Notables in all our PDF Extended History products and printed products wherever possible.

Migration of the O'Quely family

Irish families fled the English-colonized Ireland in record numbers during the 19th century for North America. Many of those destitute families died from disease during, and even shortly after, the long journey. Although those that immigrated before the Great Potato Famine of the 1840s often were granted a tract of land, those that arrived later were generally accommodated in urban centers or in work camps. Those in the urban centers would labor in the manufacturing sector, whereas those in work camps would to build critical infrastructures such as bridges, canals, roads, and railways. Regardless of when these Irish immigrants came to North America, they were critical for the rapid development of the young nations of the United States and Canada. Early immigration and passenger lists have recorded many early immigrants bearing the name of O'Quely: William Keeley who landed in America in 1765; Dennis and Ellen Keeley settled in Boston Massachusetts in 1849; Michael Keeley settled in Philadelphia, Pennsylvania in 1852.