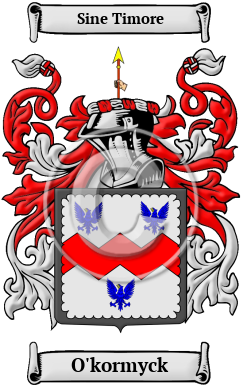 While many Irish names are familiar, their past incarnations are often shrouded in mystery, reflecting the ancient Gaelic heritage of their bearers. The original Gaelic form of the name O'kormyck is Mac Cormaic, derived from the forename Cormac.

Early Origins of the O'kormyck family

The surname O'kormyck was first found in Munster. The Cormacks of Munster were of great antiquity and descended directly from Nathi, brother of Felim who was King of Munster about the year 560 A.D. Cormac, son of Cabhsan, was the first chieftain to be called Cormack, and, of course, MacCormack came later as a direct descendent, Mac or Mc signifying the 'son of'.

Early History of the O'kormyck family

This web page shows only a small excerpt of our O'kormyck research. Another 76 words (5 lines of text) covering the years 1000, 1700, 1782 and 1720 are included under the topic Early O'kormyck History in all our PDF Extended History products and printed products wherever possible.

Official documents, crafted by early scribes and church officials, primarily contained names that were spelled according to their pronunciation. This lead to the problem of one name being recorded under several different variations, creating an illusion that a single person was many people. Among the many spelling variations of the surname O'kormyck that are preserved in the archival documents of the time are Cormack, MacCormack, McCormack, McCormick, MacCormick, Cormac, Cormick, Cormyck, Kormack, Kormick, Cormach, Cormich, Cormiche and many more.

Notable amongst the family name at this time was Anne McCormac (c. 1700-1782), birth name of Anne Bonny, born in Cork, the infamous Irish woman who became a famous pirate, operating in the Caribbean. After her capture in 1720, she and he female friend Read both "pleaded...
Another 46 words (3 lines of text) are included under the topic Early O'kormyck Notables in all our PDF Extended History products and printed products wherever possible.

Migration of the O'kormyck family

North America accepted thousands of Irish immigrants during the 19th century as their homeland suffered under foreign imperialistic rule. Although settlers from the early portion of the century came to North America by choice in search of land, by far the largest influx of Irish immigrants came to North America during the Great Potato Famine of the late 1840s. Many of these Irish families left the country destitute and in some cases suffering from disease. However, those who survived the long ocean voyage were especially vital to the development of industry in the United States and what would become known as Canada. Research of immigration and passenger lists has shown many early immigrants bearing the name O'kormyck: Daniell Cormack who settled in Virginia in 1643; Christopher Cormack settled in Annapolis Maryland in 1731; Patrick Cormack settled in New York State in 1804.