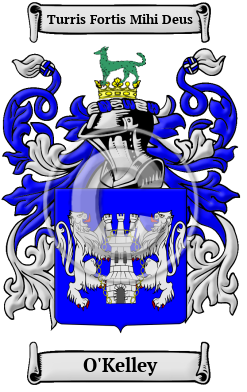 The Irish name O'Kelley has a long Gaelic heritage to its credit. The original Gaelic form of the name O'Kelley is O Ceallaigh or Mac Ceallaigh. These names denote descendants of Ceallach. This personal name may be derived from the word "ceallach," which means "strife."

Early Origins of the O'Kelley family

The surname O'Kelley was first found in southwest Ireland, south of Dublin where they held a family seat from very ancient times. The Kelly surname is conjecturally descended from King Colla da Crioch, who died in 357 A.D.

While most of the family claim Ireland as their heritage, we did find one reference in England: "Kelly, [Devon] is noteworthy as affording one of the few continuing local instances of families seated on the estates whence they take name. The Kellys of Kelly have held this manor from the time of Henry II. at least. " [1]

Henry II, King of England reigned from 1154 to 1189; so one may presume there is a relationship between the Irish and the English families, but this is the extent of our research at this time.

Early History of the O'Kelley family

Those scribes in Ireland during the Middle Ages recorded names as they sounded. Consequently, in this era many people were recorded under different spellings each time their name was written down. Research on the O'Kelley family name revealed numerous spelling variations, including Kelly, Kellie, O'Kelly, O'Killia and others.

Prominent amongst the family at this time was Daniel MacKelly; Sir Edward Kelley or Kelly, also known as Edward Talbot (1555-1597), Irish occultist and self-declared spirit medium; Charles O’Kelly (1621-1695) was an Irish soldier and writer from Aughrim, County Galway; and James Gilliam, also known as James Kelly, (died 1701), an English pirate active in the Indian Ocean during the 1690s and was...
Another 62 words (4 lines of text) are included under the topic Early O'Kelley Notables in all our PDF Extended History products and printed products wherever possible.

In the United States, the name O'Kelley is the 7,187th most popular surname with an estimated 4,974 people with that name. [2]

O'Kelley migration to the United States +

A massive amount of Ireland's native population left the island in the 19th century for North America and Australia in hopes of finding more opportunities and an escape from discrimination and oppression. A great portion of these migrants arrived on the eastern shores of the North American continent. Although they were generally poor and destitute, and, therefore, again discriminated against, these Irish people were heartily welcomed for the hard labor involved in the construction of railroads, canals, roadways, and buildings. Many others were put to work in the newly established factories or agricultural projects that were so essential to the development of what would become two of the wealthiest nations in the world. The Great Potato Famine during the late 1840s initiated the largest wave of Iris immigration. Early North American immigration and passenger lists have revealed a number of people bearing the name O'Kelley or a variant listed above:

O'Kelley Settlers in United States in the 19th Century

O'Kelley Settlers in United States in the 20th Century