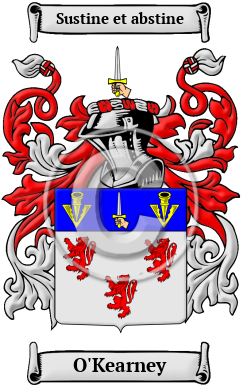 Early Origins of the O'Kearney family

The surname O'Kearney was first found in County Meath (Irish: An Mhí) anciently part of the kingdom of Brega, located in Eastern Ireland, in the province of Leinster and County Clare where O'Kearney, were chiefs of Avon-Ui-Cearney or O'Kearney's River, a district about Six-Mile-Bridge, in the baronies of Tulla and Bunratty.

Early History of the O'Kearney family

Prominent amongst the family at this time was Barnabas Kearney, in Irish Brian O Cearnaidh (1567-1640), Jesuit, born about 29 Sept. 1567, a native of Cashel, Ireland, the son of Patrick Kearney. His brother David was Roman Catholic Archbishop of Cashel from 1603 to 1625. [1] John Carney or Kearney, in Irish Sean O Cearnaidh (d. 1600?), was an Irish divine, a native of Leyney in the province of Connaught, was matriculated as a sizar of Magdalene College, Cambridge, on 12 Nov. 1561, and proceeded...
Another 84 words (6 lines of text) are included under the topic Early O'Kearney Notables in all our PDF Extended History products and printed products wherever possible.

O'Kearney Settlers in New Zealand in the 19th Century