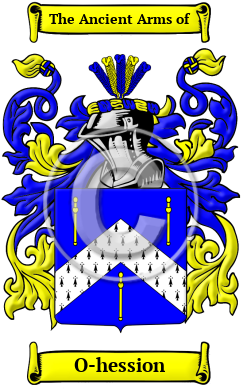 The O-hession surname is an Anglicized form of Gaelic Ó hOisín or "descendant of Oisín," a personal name derived from the word "os," meaning "deer." Others suggest that the name came from Oisín, a poet and warrior of the fianna in Irish mythology.

Early Origins of the O-hession family

The surname O-hession was first found in Connacht, where the name has long been found. The name Ó hOisín occurred in all the Irish provinces save Ulster in 11th and 12th century Annals. Hugh O'Hession was the first Archbishop of Tuam, Co. Galway (1152-1161).The family is primarily associated with North and East Galway and South Mayo. Some Anglicized their name to Usher, thus confusing it with the more common Ushers of Norman descent. The Hishon form of this name was found in County Tipperary.[1]

Early History of the O-hession family

This web page shows only a small excerpt of our O-hession research. More information is included under the topic Early O-hession History in all our PDF Extended History products and printed products wherever possible.

Spelling variations of this family name include: O'Hession, Hession, Hussian, Hishon, O Hoisin and many more.

Notable amongst the family name at this time was John Ussher, a constable of Dublin castle in 1307, but who died later in England. Henry Ussher (c. 1550-1613) was an Irish Protestant churchman, a founder of Trinity College, Dublin. Reverend James Ussher (1581-1656) was the Archbishop of Armagh, a churchman and a scholar. He is best known for his Ussher chronology, a chronology of the history of the world formulated from a literal reading of the...
Another 75 words (5 lines of text) are included under the topic Early O-hession Notables in all our PDF Extended History products and printed products wherever possible.

Migration of the O-hession family

Some of the first settlers of this family name or some of its variants were: Patrick Hishon, who came to Toronto in 1844; Michael Hession, who died enroute to Quebec, Canada, in 1847; Patrick Hession, who settled in New York in 1850.