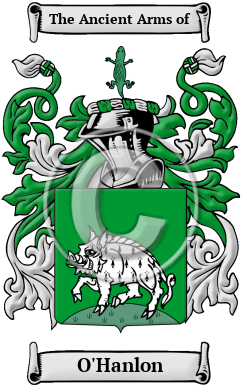 The name O'Hanlon has seen many modifications since the time in which it was first devised. In Gaelic it appeared as O hAnluain, which is possibly derived from luan, which means champion, intensified by an. [1]

Early Origins of the O'Hanlon family

The surname O'Hanlon was first found in County Armagh (Irish: Ard Mhacha) located in the province of Ulster in present day Northern Ireland. [1]

The family were Lords of Orior (the ancient name for Ulster) and claim descent through the Maddens of Ulster who were descendants of the Heremon Kings of Ireland. [2] They were "one of the most important of the septs of Ulster." [3]

"This family were 'Tanists of a large territory within the present county of Armagh, and up to the time of James I. enjoyed the honour and office of hereditary Standard-Bearer of Ulster-a privilege which Sir William Russell, when Lord Deputy, with due policy recognized; as marching against O'Neill and the northern insurgents, he committed the royal standard (which the O'Mulloy had carried through the Pale) to Hugh O'Hanlon, who had theretofore submitted to the English government.'" [4]

Early History of the O'Hanlon family

This web page shows only a small excerpt of our O'Hanlon research. Another 66 words (5 lines of text) covering the years 1537, 1620, 1681, 1641 and 1862 are included under the topic Early O'Hanlon History in all our PDF Extended History products and printed products wherever possible.

Many different spelling variations of the surname O'Hanlon were found in the archives researched. These included Scribes and church officials generally spelled a name as it sounded; as a result, a person's name could be spelt innumerable ways in his lifetime. Hanlon, Hanlin, O'Hanlon and others.

Notable amongst the family name at this time was Redmond O'Hanlon (c. 1620-1681) an Irish tóraidhe or rapparee (guerrilla soldier-outlaw) who became so when his lands were confiscated by the Anglo-Irish landowner Henry St. John...
Another 35 words (2 lines of text) are included under the topic Early O'Hanlon Notables in all our PDF Extended History products and printed products wherever possible.

In the United States, the name O'Hanlon is the 10,721st most popular surname with an estimated 2,487 people with that name. [5]

O'Hanlon migration to the United States +

The 19th century brought a massive reduction in Ireland's population. It seemed that during the Great Potato Famine of the late 1840s the Irish people had two options: starve or immigrate. Those that chose the later frequently headed for the United States, hopeful for land, work, and equality. Those determined for free land joined the migration west; while others stayed behind to live in urban centers and often work in factories. Still others began a transitory life in work camps, building the bridges, canals, railways, and highways so critical to the rapidly development of the growing industrial nation. Early passenger and immigration lists have shown many early immigrants bearing the name O'Hanlon:

O'Hanlon Settlers in United States in the 20th Century

O'Hanlon Settlers in New Zealand in the 19th Century