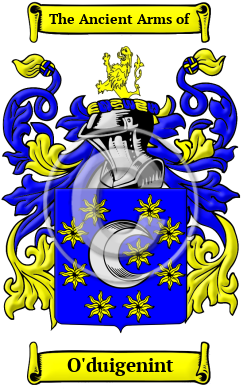 The ancient Gaelic form of the Irish name O'duigenint was O Dubhaigan. The first portion of the name is the word dubh, which means black; the second portion is likely some obsolete Irish personal name.

Early Origins of the O'duigenint family

The surname O'duigenint was first found in County Clare (Irish: An Clár) located on the west coast of Ireland in the province of Munster, where O'DuilAgin, O'Dugan, (or O'Deegan), chief of Muintir ConIochta, a district in the parish of Tomgraney, in the barony of Tullagh.

Early History of the O'duigenint family

In the Middle Ages, a name was often recorded under several different spelling variations during the life of its bearer. Literacy was rare at that time and none of the languages to be found in the British Isles had achieved any great semblance of standardization. Variations of the name O'duigenint found include Dugan, Duggan, O'Duggan, Dougan, Douggan, Dewgan, Deugan and many more.

Another 29 words (2 lines of text) are included under the topic Early O'duigenint Notables in all our PDF Extended History products and printed products wherever possible.

Migration of the O'duigenint family

Irish families began to migrate to North America in the late 18th century in the hopes of gaining their own plot of land. The majority of these early immigrant families were relatively well off because the transatlantic passage was costly. As a result the decision to immigrate was carefully made. Those immigrants that arrived in the late 1840s differed because their decision to leave was in direct response to the Great Potato Famine. Many of the families that crossed the Atlantic during this decade were destitute, either having spent all they had on the fare or even starting with nothing, but being sponsored by a philanthropic society. Whenever, these Irish families came to North America, they were made great contributions to the developing nations of the United States and what would come to be known as Canada: the earlier settlers as land clearing homesteaders, and the later immigrants as the muscle that would build the industries and routes of transportation so critical to a powerful nation. Research into the passenger and immigration lists has shown many early and significant Irish immigrants bearing the name O'duigenint: James Dugan who settled in New York State in 1775; John Duggen, who arrived in Maryland in 1739; Cornelius Duggin, who arrived in Albany, NY in 1762; John Duggin, who came to Boston in 1765.