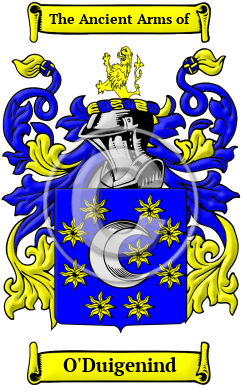 The ancient Gaelic form of the Irish name O'Duigenind was O Dubhaigan. The first portion of the name is the word dubh, which means black; the second portion is likely some obsolete Irish personal name.

Early Origins of the O'Duigenind family

The surname O'Duigenind was first found in County Clare (Irish: An Clár) located on the west coast of Ireland in the province of Munster, where O'DuilAgin, O'Dugan, (or O'Deegan), chief of Muintir ConIochta, a district in the parish of Tomgraney, in the barony of Tullagh.

Early History of the O'Duigenind family

In the days before Gaelic or English gained any significant semblance of standardization, the scribes who created documents simply recorded names as they sounded. Consequently, in the Middle Ages many people were recorded under different spellings each time their name was written down. Research into the O'Duigenind family history revealed numerous spelling variations of the name, including Dugan, Duggan, O'Duggan, Dougan, Douggan, Dewgan, Deugan and many more.

Another 29 words (2 lines of text) are included under the topic Early O'Duigenind Notables in all our PDF Extended History products and printed products wherever possible.

Migration of the O'Duigenind family

Ireland, as an English-controlled colony in the 19th century, suffered the loss of hundreds of thousands of its native people. The system of land ownership often did not sufficiently provide for the tenants who farmed the land. This was most clearly evidenced in the Great Potato Famine of the 1840s. Previous years of great demand for grain products and livestock had run the land down. Many landowners foreseeing an upcoming crisis often removed families from the land or forced them to rely on pitifully small plots where only a subsistence living could be made. When the famines of 1845, 46, and 48 hit, many had nothing. Disease and starvation became widespread and families boarded ships for elsewhere any way they could. Those who went to America were instrumental in developing the industrial power known today: many Irish were employed in hard labor positions in factories and in building the bridges, canals, roads, and railways necessary for a strong industrial nation. Research of early immigration and passenger lists has shown that many bearers of the name O'Duigenind: James Dugan who settled in New York State in 1775; John Duggen, who arrived in Maryland in 1739; Cornelius Duggin, who arrived in Albany, NY in 1762; John Duggin, who came to Boston in 1765.