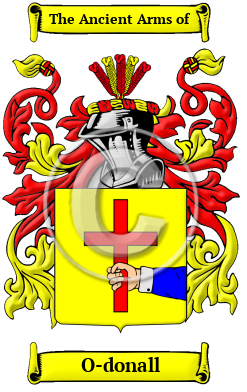 The original Gaelic form of O-donall was O'Domhnaill, which means descendant of Domhnall or descendant of Donal(l.) The name is derived from the Irish words "domhan" (the world) and "all" (mighty): son of Colga, a quo O'Domhnaill. [1] The surname claims descendancy from the Heremon Kings of Ireland. [1]

Early Origins of the O-donall family

The surname O-donall was first found in County Galway (Irish: Gaillimh) part of the province of Connacht, located on the west coast of the Island, where records show this distinguished Irish Clann were directly descended from Connell, son of King Niall of the Nine Hostages who died in 371. Today the most numerous listing of the name can be found in Tirconaill (Donegal), but there are two other branches that are significant, those in Corcabaskin in West Clare, and those of the Ui Maine (Hy Many) in County Galway. [2] All descend from the same ancestor name Domhnall (English: Donal) and are O Domhnaill (Irish Gaelic.) The Donegal "promedominance only dates from the thirteenth century; prior to that they were located in the comparatively restricted area around Kilmacrenan, County Donegal." [2]

Early History of the O-donall family

This web page shows only a small excerpt of our O-donall research. Another 68 words (5 lines of text) covering the years 1571, 1602, 1601, 1602, 1575 and 1608 are included under the topic Early O-donall History in all our PDF Extended History products and printed products wherever possible.

Just like the English language, the Gaelic language of Ireland was not standardized in the Middle Ages. Therefore, one's name was often recorded under several different spellings during the life of its bearer. Spelling variations revealed in the search for the origins of the O-donall family name include O Donnell, O'Donald, O'Donle, O'Donall, O'Donnell and others.

Notable amongst the family name at this time was Red Hugh O'Donnell (1571-1602), Irish chieftain and Earl of Tyrconnel, who fought against the English, but was defeated, with Hugh O'Neill, 2d Earl of Tyrone, at Kinsale in 1601. He was succeeded in...
Another 42 words (3 lines of text) are included under the topic Early O-donall Notables in all our PDF Extended History products and printed products wherever possible.

Migration of the O-donall family

Irish families left their homeland in astonishing numbers during the 19th century in search of a better life. Although individual reasons vary, most of these Irish families suffered from extreme poverty, lack of work opportunities, and exorbitant rents in their homeland. Many decided to travel to Australia or North America in the hopes of finding greater opportunities and land. The Irish immigrants that came to North America initially settled on the East Coast, often in major centers such as Boston or New York. But like the many other cultures to settle in North America, the Irish traveled to almost any region they felt held greater promise; as a result, many Irish with gold fever moved all the way out to the Pacific coast. Others before that time left for land along the St. Lawrence River and the Niagara Peninsula, or the Maritimes as United Empire Loyalists, for many Irish did choose to side with the English during the American War of Independence. The earliest wave of Irish migration, however, occurred during the Great Potato Famine of the 1840s. An examination of early immigration and passenger lists has revealed many people bearing the O-donall name: Charles, Roger, Thomas, William O'Donald who arrived in Philadelphia, Pennsylvania between 1840 and 1860; Phillip O'Donel arrived in Boston Massachusetts in 1767.