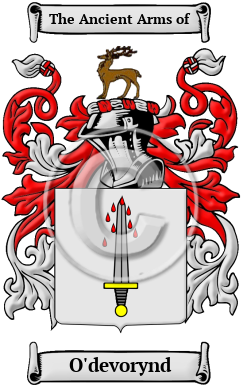 All Irish surnames have a long, ancient Gaelic history behind them. The original Gaelic form of the name O'devorynd is O Dabhoireann, or also Dubhdabhoireann, derived from the words dubh, which means black, and an da Bhoireann, which means of the two Burrens.

Early Origins of the O'devorynd family

The surname O'devorynd was first found in County Clare (Irish: An Clár) located on the west coast of Ireland in the province of Munster, where they have been anciently seated as Chiefs of their territory at Cahirmacneaghty. They were anciently a Dalcassian sept of Brehons (Judges or Lawyers) and came down to Clare from the north probably sometime before the 10th century to settle in their north Clare barony at Noughaval, wherein this distinguished sept had their own mortuary chapel within the Church of Noughaval.

Early History of the O'devorynd family

This web page shows only a small excerpt of our O'devorynd research. Another 141 words (10 lines of text) covering the years 1317, 1364, 1634, 1634, 1741 and 1746 are included under the topic Early O'devorynd History in all our PDF Extended History products and printed products wherever possible.

Numerous spelling variations of the surname O'devorynd exist. A partial explanation for these variants is that ancient scribes and church officials recorded names as they were pronounced, often resulting in a single person being recorded under several different spellings. Different spellings that were found include Davoren, O'Davoran, O'Davoren, Davoran, Devoren and many more.

Prominent amongst the family at this time was Gillananaev O'Davoren, the Chief Judge; and Domnal O'Davoren, who collected materials about early Irish law in the 16th century. In fact, the O'Davorens were well known as the scholarly...
Another 36 words (3 lines of text) are included under the topic Early O'devorynd Notables in all our PDF Extended History products and printed products wherever possible.

Migration of the O'devorynd family

Irish families began to immigrate to British North America and the United States in the 18th century, but the greatest influx of Irish immigrants came during the Great Potato Famine of the late 1840s. The earlier settlers came to North America after a great deal of consideration and by paying relatively high fees for their passage. These settlers were primarily drawn by the promise of land. Those later settlers that came during the 1840's were trying to escape the conditions of poverty, starvation, disease, and death that had stricken Ireland. Due to the enormity of their numbers and the late date of their arrival, these immigrants primarily became hired laborers instead of homesteading settlers like their predecessors. An exhaustive search of immigration and passenger lists has revealed many Irish immigrants North America bearing the name O'devorynd: Michael O'Deveren arrived in Pennsylvania in 1854.