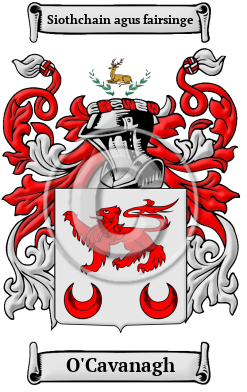 Irish names tend to vary widely in their spelling and overall form. The original Gaelic form of the name O'Cavanagh is Caomhanach, an adjective denoting association with St. Caomhan. The first Kavanagh, Donal, the son of Dermot MacMurrough, was fostered by a successor of this saint.

Early Origins of the O'Cavanagh family

The surname O'Cavanagh was first found in County Carlow (Irish: Cheatharlach) a small landlocked area located in the province of Leinster in the South East of Ireland, where they held a family seat from very ancient times.

Early History of the O'Cavanagh family

This web page shows only a small excerpt of our O'Cavanagh research. Another 141 words (10 lines of text) covering the year 1889 is included under the topic Early O'Cavanagh History in all our PDF Extended History products and printed products wherever possible.

More information is included under the topic Early O'Cavanagh Notables in all our PDF Extended History products and printed products wherever possible.

Migration of the O'Cavanagh family