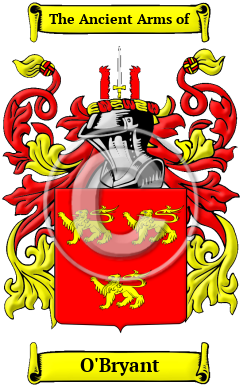 The name O'Bryant is of Norman origin, derived from the personal name Brian which was popular in France and Norman England before it came to Ireland. It has sometimes been used as a synonym for O'Brien, though it is of different origin.

Brian (926-1014), was King of Ireland, known in Irish writings as Brian Boroimhe, Boroma most commonly in earlier books as Brian Mac Cennedigh (Book of Leinster), and in English writings as Bryan Mac Kennedy and Brian Boru, He was a native of the northern part of Munster, and was of the royal descent of Thomond, of the family known as Dal Cais. Brian, who was born in 926, was the youngest of three sons. [1]

Early Origins of the O'Bryant family

The surname O'Bryant was first found in County Kilkenny (Irish: Cill Chainnigh), the former Kingdom of Osraige (Ossory), located in Southeastern Ireland in the province of Leinster, where bearers of the surname settled in the 13th century.

Early History of the O'Bryant family

This web page shows only a small excerpt of our O'Bryant research. More information is included under the topic Early O'Bryant History in all our PDF Extended History products and printed products wherever possible.

Spelling variations of this family name include: Bryan, Brian, OBryan, McBryan, O'Bryant and others.

Another 29 words (2 lines of text) are included under the topic Early O'Bryant Notables in all our PDF Extended History products and printed products wherever possible.

In the United States, the name O'Bryant is the 6,635th most popular surname with an estimated 4,974 people with that name. [2]

Migration of the O'Bryant family