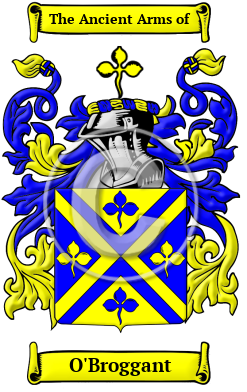 Today's Irish surnames are underpinned by a multitude of rich histories. The name O'Broggant originally appeared in Gaelic as O Brogain. Broccán Clóen (Saint Brogan) was an Irish cleric who lived in the sixth or seventh century. Various spellings were used to denote him including: Brogan, Broccan, Bracan, Bearchan and Bearchanus. Saint Broccán of Rosstuirc (of 17 September), is believed to be the author of the hymn to Saint Brigid. He was possibly the nephew of Saint Patrick. Some people believe that were in fact more than one Saint Brogan.

Early Origins of the O'Broggant family

The surname O'Broggant was first found in counties Mayo and Sligo (Irish: Sligeach), in the province of Connacht in Northwestern Ireland, in north Connacht where they had been a part of the ancient Ui Fiachrach since before recorded history. [1]

Early History of the O'Broggant family

This web page shows only a small excerpt of our O'Broggant research. Another 126 words (9 lines of text) are included under the topic Early O'Broggant History in all our PDF Extended History products and printed products wherever possible.

Before widespread literacy came to Ireland, a name was often recorded under several different variations during the life of its bearer. Accordingly, numerous spelling variations were revealed in the search for the origin of the name O'Broggant family name. Variations found include Brogan, Brogin, Brogon, O'Brogan, Brogen, Brochain and many more.

More information is included under the topic Early O'Broggant Notables in all our PDF Extended History products and printed products wherever possible.

Migration of the O'Broggant family

To escape the religious and political discrimination they experienced primarily at the hands of the English, thousands of Irish left their homeland in the 19th century. These migrants typically settled in communities throughout the East Coast of North America, but also joined the wagon trains moving out to the Midwest. Ironically, when the American War of Independence began, many Irish settlers took the side of England, and at the war's conclusion moved north to Canada. These United Empire Loyalists, were granted land along the St. Lawrence River and the Niagara Peninsula. Other Irish immigrants settled in Newfoundland, the Ottawa Valley, New Brunswick and Nova Scotia. The greatest influx of Irish immigrants, however, came to North America during the Great Potato Famine of the late 1840s. Thousands left Ireland at this time for North America and Australia. Many of those numbers, however, did not live through the long sea passage. These Irish settlers to North America were immediately put to work building railroads, coal mines, bridges, and canals. Irish settlers made an inestimable contribution to the building of the New World. Early North American immigration records have revealed a number of people bearing the Irish name O'Broggant or a variant listed above, including: Thomas Brogan, who came to Pennsylvania in 1773; Patrick Brogan, who came to New York, NY in 1815; William Brogan, who arrived in Philadelphia in 1818.