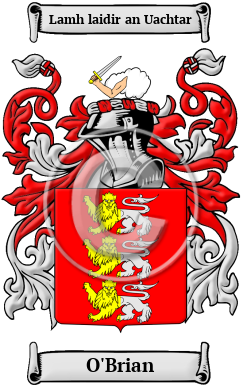 The old Gaelic name used by the O'Brian family in Ireland was O Briain, which means descendant of Brian.

Early Origins of the O'Brian family

The surname O'Brian was first found in Thomond, a territory comprised of most of County Clare with adjacent parts of counties Limerick and Tipperary. Prior to the 10th century, the sept was a Dalcassian Clan known as the Ui Toirdealbhaigh and achieved prominence with the rise of their eponymous ancestor, Brian Boru (941-1014), to the High Kingship of Ireland. Brian Boru, by far the most outstanding figure of this family, is widely acknowledged as the greatest of all the ancient Kings of Ireland and is best remembered for driving the Norsemen out of Ireland at the Battle of Clontarf in 1014.

Early History of the O'Brian family

Irish names recorded during the Middle Ages are characterized by many spelling variations. This preponderance of variations for common names can be explained by the fact that the scribes and church officials that kept records during that period individually decided how to capture one's name. These recorders primarily based their decisions on how the name was pronounced or what it meant. Research into the name O'Brian revealed many variations, including O'Brien, OBrine, O'Brion, O'Bryan, O'Bryen, McBrien, McBrine, Brian, Briand, Briant, Brine, Brines, Briens and many more.

Notable amongst the family name at this time was Brian Sreamhach MacMathghamhna O'Brien, king of the Irish region of Thomond (1369-1400); Daniel O'Brien (1577-1663), member of the Supreme Council of Catholic Confederates; Daniel O'Brien (d. 1690), founder of the Irish Brigade known as Clare's Dragoons; Murrough McDermod O'Brien, 1st Earl of Inchiquin and 6th Baron Inchiquin (1614-1674); Henry O'Brien, Lord Ibrackan or Lord...
Another 63 words (4 lines of text) are included under the topic Early O'Brian Notables in all our PDF Extended History products and printed products wherever possible.

In the United States, the name O'Brian is the 5,528th most popular surname with an estimated 4,974 people with that name. [1]

O'Brian migration to the United States +

Irish immigrants began to leave the English-controlled Ireland in sizable numbers during the late 18th century. Many of these Irish immigrated to British North America or the United States in the hopes of gaining their own tract of farmland. This pattern of migration grew steadily until the 1840s when the Great Potato Famine caused a great exodus of immigrants to North America. These immigrants differed from their predecessors in that they were desperately fleeing the disease and starvation that plagued their homeland, and many were entirely destitute when they arrived in North America. Although these penniless immigrants were not warmly welcomed when they arrived, they were critical to the rapid development of the United States and what would become known as Canada. Many went to populate the western frontiers and others provided the cheap labor the new manufacturing sector and the building of bridges, roads, railways, and canals required. A thorough examination of immigration and passenger lists has revealed some of the earliest people to arrive in North America with name O'Brian or one of its variants:

O'Brian Settlers in United States in the 18th Century

O'Brian Settlers in United States in the 19th Century

O'Brian Settlers in Australia in the 19th Century

O'Brian Settlers in New Zealand in the 19th Century