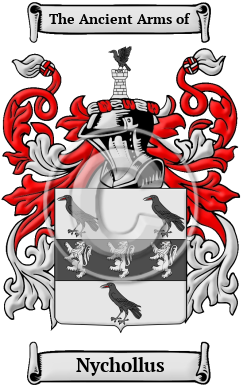 The ancient surname Nychollus came from The surname Nychollus is a patronymic surname, belonging to the category of surnames known as hereditary surnames. Nychollus is derived from the personal name Nicholas. It was a popular given name in the Middle Ages. This surname came to England with the Bretons, who accompanied Duke William of Normandy when he invaded England in 1066. The Bretons were from the peninsula of Brittany in the northwest of France. Formerly known as Armorica, a possession of the Roman Empire, this land consists of a plateau with a deeply indented coast and is broken by hills in the west. However, the region was renamed Britannia Minor by the Romans, following the emigration of six thousand Britons across the English Channel, an event which took place at the behest of the Roman Commander in Britain.

Early Origins of the Nychollus family

The surname Nychollus was first found in Cornwall; although in early times another branch of the family was established at West Horsley in Surrey. "The east window contains some very ancient stained glass; and there are two handsome monuments to the Nicholas family, one of whom, Sir Edward, was secretary of state to Charles I. and II." [1]

Early History of the Nychollus family

Notable of this family during the Middle Ages was Matthew Nicholas (1594-1661), English Dean of St. Paul's Cathedral, London; Sir Edward Nicholas (1593-1669), an English office holder and politician...
Another 29 words (2 lines of text) are included under the topic Early Nychollus Notables in all our PDF Extended History products and printed products wherever possible.

Migration of the Nychollus family to Ireland

Some of the Nychollus family moved to Ireland, but this topic is not covered in this excerpt. More information about their life in Ireland is included in all our PDF Extended History products and printed products wherever possible.

Migration of the Nychollus family

Early immigration records have shown some of the first of the name Nychollus to arrive on North American shores were: Austin Nicholas, who arrived in Plymouth in 1621; Elizabeth Nicholls, who came to New England in 1635; Andrew Nichols, who settled in Virginia in 1648.