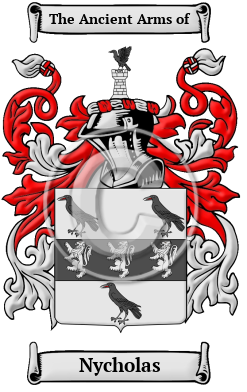 The history of the name Nycholas began when it was derived from The surname Nycholas is a patronymic surname, belonging to the category of surnames known as hereditary surnames. Nycholas is derived from the personal name Nicholas. It was a popular given name in the Middle Ages. This surname came to England with the Bretons, who accompanied Duke William of Normandy when he invaded England in 1066. The Bretons were from the peninsula of Brittany in the northwest of France. Formerly known as Armorica, a possession of the Roman Empire, this land consists of a plateau with a deeply indented coast and is broken by hills in the west. However, the region was renamed Britannia Minor by the Romans, following the emigration of six thousand Britons across the English Channel, an event which took place at the behest of the Roman Commander in Britain.

Early Origins of the Nycholas family

The surname Nycholas was first found in Cornwall; although in early times another branch of the family was established at West Horsley in Surrey. "The east window contains some very ancient stained glass; and there are two handsome monuments to the Nicholas family, one of whom, Sir Edward, was secretary of state to Charles I. and II." [1]

Early History of the Nycholas family

The Old and Middle English languages lacked definite spelling rules, and therefore, Breton surnames have many spelling variations. Latin and French, which were the official court languages, were also influential on the spelling of surnames. The spelling of surnames was rarely consistent in medieval times, and scribes and church officials recorded names as they sounded rather than adhering to any specific spelling rules. Therefore, it was common to find the same individual referred to with different spellings of their surname in the ancient chronicles. Moreover, a large number of foreign names were brought into England after the Norman Conquest, which accelerated and accentuated the alterations to the spelling of various surnames. The name has been spelled Nicholas, Nicholl, Nichol, Nicholls, Nicolas and many more.

Notable of this family during the Middle Ages was Matthew Nicholas (1594-1661), English Dean of St. Paul's Cathedral, London; Sir Edward Nicholas (1593-1669), an English office holder and politician...
Another 29 words (2 lines of text) are included under the topic Early Nycholas Notables in all our PDF Extended History products and printed products wherever possible.

Migration of the Nycholas family to Ireland

Some of the Nycholas family moved to Ireland, but this topic is not covered in this excerpt. More information about their life in Ireland is included in all our PDF Extended History products and printed products wherever possible.

Migration of the Nycholas family

Early North American records indicate many people bearing the name Nycholas were among those contributors: Austin Nicholas, who arrived in Plymouth in 1621; Elizabeth Nicholls, who came to New England in 1635; Andrew Nichols, who settled in Virginia in 1648.