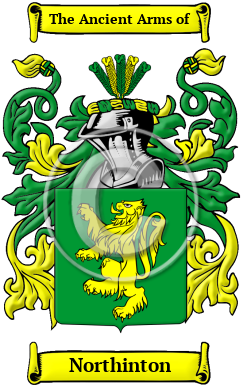 The surname Northinton is derived from a place name, derived from the Od English words "norð" or "north" and "tun," meaning "enclosure." The Northinton surname is considered to have arisen independently, coming from one of the many places so named throughout Britain.

Early Origins of the Northinton family

The surname Northinton was first found in Kent where Osuuardus de Nordton [1] was on record in the Domesday Book of 1086. "Egbert Coigniers whose son Roger was living in the ninth year of Edward II., and was father of Roger, who marrying the heiress of Norton of Norton, their son took that name." [2]

However, "the Gazetter mentions between forty and fifty parish, townships, &c., [etc.] so called, and there are hundreds of farms and minor localities [named Norton.]" [3]

Literally, the place name means "northern farmstead or homestead". [4] Other early records of the family include a Norton, in a Herald's visitation in 1043 listed in the Harlein Manuscripts. Another early record of the name is Leofwin de Norton in the Pipe Rolls for Lincolnshire for 1177. [5]

Early History of the Northinton family

Spelling variations of this family name include: Norton, Nordton, Northon, Northinton, Northington and others.

Distinguished members of the family include Thomas Norton (died c. 1477), English alchemist, elected a member of the UK Parliament from Bristol in 1436; Samuel Norton (1548- c. 1604), scientist, justice of the peace and sheriff of Somerset; Thomas Norton (1532-1584), English lawyer, politician, writer of verse, known for his anti-Catholic actions; Sir Richard Norton of Rotherfield, Southhampton, who was created a Baronet on May 23, 1622; Sir Richard Norton, 1st Baronet...
Another 72 words (5 lines of text) are included under the topic Early Northinton Notables in all our PDF Extended History products and printed products wherever possible.

Migration of the Northinton family to Ireland

Some of the Northinton family moved to Ireland, but this topic is not covered in this excerpt.
Another 40 words (3 lines of text) about their life in Ireland is included in all our PDF Extended History products and printed products wherever possible.

Migration of the Northinton family