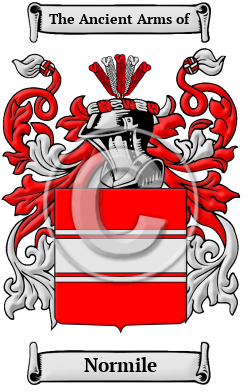 The surname Normile comes from the original Irish Mac Confhormaoile, meaning hound of Fermoyle. Formaoil is the obsolete name of a castle which was once located in County Clare.

Early Origins of the Normile family

The surname Normile was first found in County Clare (Irish: An Clár) located on the west coast of Ireland in the province of Munster, the place with which the name is most closely associated.

Early History of the Normile family

This web page shows only a small excerpt of our Normile research. More information is included under the topic Early Normile History in all our PDF Extended History products and printed products wherever possible.

Spelling variations of this family name include: Normoyle, Normile, MacNormoyle and others.

More information is included under the topic Early Normile Notables in all our PDF Extended History products and printed products wherever possible.

Normile migration to the United States +

Normile Settlers in United States in the 19th Century