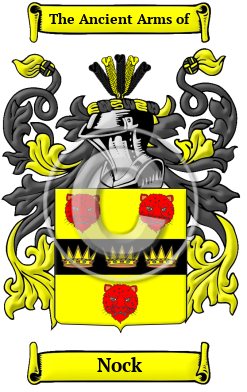 The name Nock is thought to come from the Middle English phrase "atten okes," meaning "at the oaks;" as such it was likely originally a name for someone who lived by some oak trees. [1]

"Aten Oke and Atten Oke were the original forms. When the preposition began to be dropped from this class of surnames, the final N in this instance adhered to the designation of the tree, and we obtained the form Noake, since pluralized into Noakes." [2]

Early Origins of the Nock family

The surname Nock was first found in Buckinghamshire where they held a family seat. This ancient Saxon name in derived from common usage from atte en Oak, a place designation, which originated in those counties surrounding London known as the home counties. including Sussex, Essex, and others. [3] [4]

By 1326 the name was well entrenched in that region and Richard Attenok is recording with estates in Buckingham in 1275, and was succeeded by Richard Noke. [1]

Early History of the Nock family

Distinguished members of the family include James Nokes (Noke, Noak, Noakes) (died 1692), an English actor, whose laughter-arousing genius was well known. He was one of the male actors who played female roles in the newly reopened playhouses shortly after the Restoration of Charles II. But, that practice did not last long as in 1662, Charles II ordered that only women should play female roles. William Noake (1690-1737), was a...
Another 68 words (5 lines of text) are included under the topic Early Nock Notables in all our PDF Extended History products and printed products wherever possible.

In the United States, the name Nock is the 8,364th most popular surname with an estimated 2,487 people with that name. [6]

Nock migration to the United States +

Nock Settlers in United States in the 17th Century

Nock Settlers in United States in the 19th Century

Nock Settlers in Australia in the 19th Century

Nock Settlers in New Zealand in the 19th Century