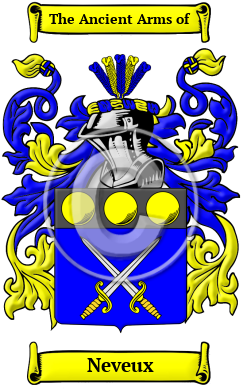 Early Origins of the Neveux family

The surname Neveux was first found in Normandy (French: Normandie), the former Duchy of Normandy, where they held a family seat in the seigneurie of Chateaux.

The family also held estates to the south in both Maine and Anjou and also in Poitou and Brittany. The branch in Anjou eventually moved to Germany and held a family seat at Windschlag. This branch was originally of Folie in Anjou, and they became Barons in the year 1700. Meanwhile the family were elevated to the nobility as the Marquis d'Aiguelle. This aristocratic family flourished on their estates until the Revolution in 1789.

Pierre Neveu, son of Pierre-Mathieu and Marguerite (née Renaud), settled in Quebec in the 17th century. He married Claire Levieux, daughter of Pierre and Jeanne (née Legrand), at Sainte-Famille on 2nd September 1670. [1]

Early History of the Neveux family

This web page shows only a small excerpt of our Neveux research. More information is included under the topic Early Neveux History in all our PDF Extended History products and printed products wherever possible.

More information is included under the topic Early Neveux Notables in all our PDF Extended History products and printed products wherever possible.

Migration of the Neveux family

Some of the first settlers of this family name or some of its variants were: Pierre Neveu who settled in Quebec in 1669, arriving from Aunis near Bordeaux on the west coast of France; Michel Neveu arrived in Quebec in 1746 from Ile-de-France.