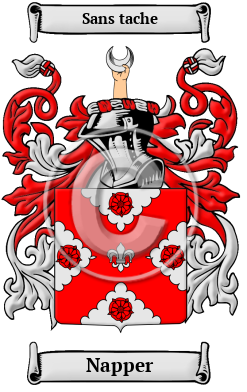 The first family to use the name Napper lived in the area that was once the ancient Scottish kingdom of Dalriada. It is a name for a person at a royal court who was in charge of the tablecloths and linen, which were collectively called the napery. "In England, in the reign of Henry I, William de Hastings held the manor of Ashele in Norfolk by the service of taking charge of the napery, i.e. tablecloths and linen at the coronation of the English kings. The first record of the name in Scotland is c. 1290 when John Naper obtained from Malcolm, earl of Lennox, a charter of the quarter-land called Kylmethew. This John Naper is included in the inhibition by the bishop of Glasgow directed against Malcolm, earl of Lennoy and his adherents in 1294 and is doubtless the John le Naper of the county of Dunbretan who rendered homage in 1296." [1]

Early Origins of the Napper family

Early History of the Napper family

Translation in medieval times was an undeveloped science and was often carried out without due care. For this reason, many early Scottish names appeared radically altered when written in English. The spelling variations of Napper include Napier, Naper, Napper, Naiper, Napeer, Neaper and others.

Notable amongst the Clan from early times was George Napper (Napier) (1550-1610), an English Roman Catholic priest, a Catholic martyr, beatified by Pope Pius XI; John Napier (1550-1617), a famed mathematician and inventor of logarithms, this eighth laird of Merchiston was also extremely involved in religious debates (he was a staunch anti-Catholic) and was an inventor of military devices, such as a horse-drawn tank and a type of submarine; Sir Robert Napier, 1st Baronet (1560-1637), of Luton Hoo in Bedfordshire, an English merchant; Sir Robert Napier, 2nd Baronet (c. 1603-1661), of...
Another 90 words (6 lines of text) are included under the topic Early Napper Notables in all our PDF Extended History products and printed products wherever possible.

In the United States, the name Napper is the 7,470th most popular surname with an estimated 4,974 people with that name. [5]

Migration of the Napper family to Ireland

Some of the Napper family moved to Ireland, but this topic is not covered in this excerpt.
Another 60 words (4 lines of text) about their life in Ireland is included in all our PDF Extended History products and printed products wherever possible.

Napper migration to the United States +

Many settled along the east coast of what would become the United States and Canada. As the American War of Independence broke out, those who remained loyal to the crown went north to Canada as United Empire Loyalists. The ancestors of all of these hardy Dalriadan-Scottish settlers began to recover their collective history in the 20th century with the advent of the vibrant culture fostered by highland games and Clan societies in North America. Highland games, clan societies, and other organizations generated much renewed interest in Scottish heritage in the 20th century. The Napper were among the earliest of the Scottish settlers as immigration passenger lists have shown:

Napper Settlers in United States in the 17th Century

Napper Settlers in Australia in the 19th Century

Napper Settlers in New Zealand in the 19th Century