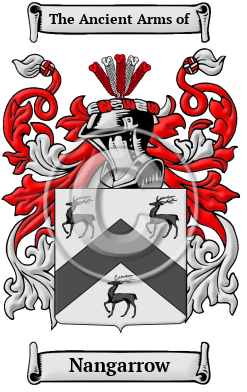 The Nangarrow surname is a habitational name taken on from any of several places so named in Cornwall. The place names come from the Cornish words "nans," meaning "valley," and "carow," meaning "a stag."

Early Origins of the Nangarrow family

The surname Nangarrow was first found in Cornwall where they held a family seat as Lords of the Manor of Nancarrow.

Early History of the Nangarrow family

This web page shows only a small excerpt of our Nangarrow research. Another 72 words (5 lines of text) are included under the topic Early Nangarrow History in all our PDF Extended History products and printed products wherever possible.

More information is included under the topic Early Nangarrow Notables in all our PDF Extended History products and printed products wherever possible.

Migration of the Nangarrow family

In the immigration and passenger lists a number of early immigrants bearing the name Nangarrow were found: Ellin Nancarro, who came to St. Christopher in 1634; John Nancarron, who settled in Philadelphia in 1803; and Walter Nancarrow, age 5, who was recorded in the census of Ontario, Canada of 1871..