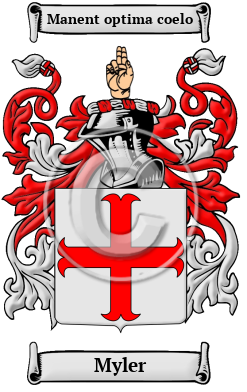 The roots of the name Myler are found among the Strathclyde-Briton people of the ancient Scottish/English Borderlands. Myler was originally found in the county of Dumfries.

Early Origins of the Myler family

The surname Myler was first found in Dumfriesshire (Gaelic: Siorrachd Dhùn Phris), a Southern area, bordering on England that today forms part of the Dumfries and Galloway Council Area, where the Myler family held a family seat from ancient times. One line had its ancestral seat at Dalswinton, Dumfriesshire. During the Middle Ages, occupational names were frequently recorded in Latin; thus, one who worked at a mill would have been documented under the name Milendinarius, Le Molendinator, or De Molendino. The modern spellings "Miller" and "Millar" came into general use about 1500; earlier documents usually show the name in Latin.

Early History of the Myler family

This web page shows only a small excerpt of our Myler research. Another 130 words (9 lines of text) covering the year 1253 is included under the topic Early Myler History in all our PDF Extended History products and printed products wherever possible.

In the era before dictionaries, there were no rules governing the spelling or translation of names or any other words. Consequently, there are an enormous number of spelling variations in Medieval Scottish names. Myler has appeared as Miller, Millar, Myllar, Mylar, Millare, Myllair and many more.

More information is included under the topic Early Myler Notables in all our PDF Extended History products and printed products wherever possible.

Migration of the Myler family to Ireland

Some of the Myler family moved to Ireland, but this topic is not covered in this excerpt.
Another 45 words (3 lines of text) about their life in Ireland is included in all our PDF Extended History products and printed products wherever possible.

Myler migration to the United States +

Myler Settlers in United States in the 18th Century