Early Origins of the Murcell family

The surname Murcell was first found in Aberdeenshire (Gaelic: Siorrachd Obar Dheathain), a historic county, and present day Council Area of Aberdeen, located in the Grampian region of northeastern Scotland, where they held a family seat from ancient times. The name would seem to have no connection with either Morrison or Murray, and the development of the family seems to have taken place in the 14th century in the county of Aberdeen.

Early History of the Murcell family

This web page shows only a small excerpt of our Murcell research. Another 114 words (8 lines of text) covering the years 1448, 1491, 1528, 1598 and 1791 are included under the topic Early Murcell History in all our PDF Extended History products and printed products wherever possible.

More information is included under the topic Early Murcell Notables in all our PDF Extended History products and printed products wherever possible.

Migration of the Murcell family

Some of the first settlers of this family name or some of its variants were: Catherine Murison who settled with her two children in Boston Massachusetts in 1821. 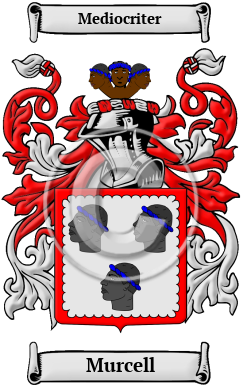