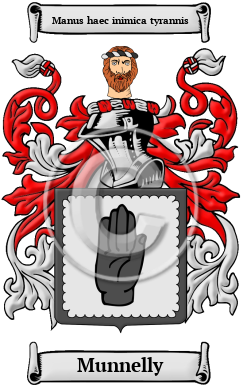 Munnelly is a name of ancient Norman origin. It arrived in England with the Norman Conquest of 1066. The Munnelly family lived in the places named Manley in Cheshire. The place-name was originally derived from the Old English word moene, which means common or shared, and leah, which means wood or clearing. [1]

This surname is still found most frequently around the villages of Manley in Devon and Cheshire.

Early Origins of the Munnelly family

The surname Munnelly was first found in Cheshire at Manley, a village and civil parish in the union of Runcorn, Second division of the hundred of Eddisbury. [2] The township dates back to the Domesday Book of 1086 when it was listed as Menlie. [3]

"The manor of Manley in Cheshire was possessed in the reign of Henry III. by a family who assumed the name of the township, and held it as mediate lords under the Dones of Crowton." [4]

This "family was an old one. Burke refers its origin to a 'Conqueror's follower' who appears as 'Manlay' in 'Battle Abbey Roll' (Holinshed, Chronicles, 1807, ii. 5). From the twelfth to the sixteenth century they resided in Chester, but in 1520 moved to Denbigh." [5]

Despite the aforementioned, we must look to Devon to find the first listing in early rolls. It is there that William de Manelegh listed in 1202. Over one hundred years later, in Yorkshire, we found Alexander and James Manly in the Assize Rolls of 1363. [6]

Cheshire proved to be stronghold of the family for centuries as the Wills at Chester listed Nicholas Manley, of Poulton, 1595, Ann Manley, of Chester, widow, 1618; and Thomas Manley, of Manley, husbandman, 1665. [7]

Early History of the Munnelly family

Multitudes of spelling variations are a hallmark of Anglo Norman names. Most of these names evolved in the 11th and 12th century, in the time after the Normans introduced their own Norman French language into a country where Old and Middle English had no spelling rules and the languages of the court were French and Latin. To make matters worse, medieval scribes spelled words according to sound, so names frequently appeared differently in the various documents in which they were recorded. The name was spelled Manley, Mandley, Mandly, Manly, Mannley and others.

Outstanding amongst the family at this time was John Manley (c 1622-1699), an English politician, Post Master General, Member of Parliament for Denbigh Boroughs in 1659; and Mary de la Riviere Manley (c1672-1724), an English writer, editor of The Examiner, probably best known for her two plays "The Lost Lover" and "The Royal Mischief." She was the daughter of Sir Roger Manley [q. v.], and was born about 1672 in Jersey, or, according to another version, at sea between Jersey and Guernsey. She lost her mother while she was young, and her father, who had literary tastes, does not appear to...
Another 269 words (19 lines of text) are included under the topic Early Munnelly Notables in all our PDF Extended History products and printed products wherever possible.

Migration of the Munnelly family to Ireland

Some of the Munnelly family moved to Ireland, but this topic is not covered in this excerpt. More information about their life in Ireland is included in all our PDF Extended History products and printed products wherever possible.

Munnelly Settlers in New Zealand in the 19th Century