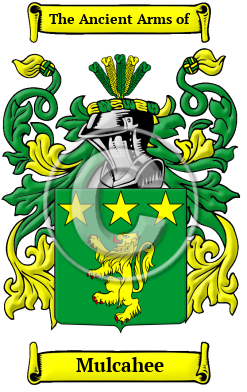 There are multitude of rich histories underlying the many Irish surnames in use today. The name Mulcahee originally appeared in Gaelic as O Maolchathaigh, which means "a descendant of a devotee of St. Cathach." The surname is not, as is often believed, derived from "cathach," meaning "warlike."

Early Origins of the Mulcahee family

The surname Mulcahee was first found in County Tipperary (Irish: Thiobraid Árann), established in the 13th century in South-central Ireland, in the province of Munster. [1] They claim descendancy from the Moores, hence the same shield. "John, a younger brother or Roger Caoch who is No. 114 on the 'Moore' pedigree, was the ancestor of Mulcahy." The author continues with a footnote, "From a similarity in the pronunciation of the names, some were of opinion the Maolcaich, who is mentioned in the Stowe Missal, might have been the ancestor of the family. " [2] From these early beginnings, two additional branches were established in Ardpaddeen and in Kilkenny. Of this latter branch, "the ancient fort or rath in the parish of Castleconor, County Sligo known as Rath Maoilcatha, has suggested the idea that this family may have derived their name from the Maolcatha after whom the rath is called; and therefore that they are descended from the royal stock from which branched the O'Connors, Kings of Connaught." [2]

Early History of the Mulcahee family

This web page shows only a small excerpt of our Mulcahee research. Another 102 words (7 lines of text) are included under the topic Early Mulcahee History in all our PDF Extended History products and printed products wherever possible.

In the Middle Ages, a name was often recorded under several different spelling variations during the life of its bearer. Literacy was rare at that time and none of the languages to be found in the British Isles had achieved any great semblance of standardization. Variations of the name Mulcahee found include Mulcahey, O'Mulcahey, Mulcahy, O'Mulcahy, Mulcahee, Mulkey, McMulkey and many more.

More information is included under the topic Early Mulcahee Notables in all our PDF Extended History products and printed products wherever possible.

Migration of the Mulcahee family

Irish emigration to North America began modestly in the late 18th century. At this time, Irish families made the journey to British North America and the United States by choice and after careful consideration: they were primarily in search of a suitably large stretch of land to call their own. This pattern would change most dramatically during the Great Potato Famine of the late 1840s. For example, the years 1825-1845 saw approximately 450,000 heading to British North America and 400,000 to the United States, but in 1847, at the height of the famine, it is estimated that more than 104,000 Irish immigrants went to British North America and more than 119,000 to the United States. An examination of passenger and immigration lists has revealed many early immigrants bearing the name Mulcahee: John and Mary Mulcahy settled in Boston in 1849; along with Patrick; David, Denis, John, Thomas, Timothy, William Mulcahy all arrived in Pennsylvania between 1800 and 1860..