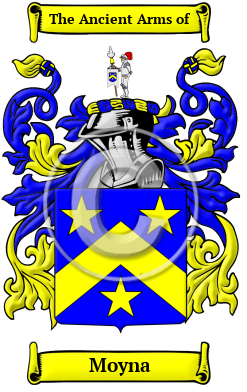 The surname Moyna is an anglicized version of the Irish name O Muimhneachain.

Early Origins of the Moyna family

The surname Moyna was first found in County Mayo (Irish: Maigh Eo) located on the West coast of the Republic of Ireland in the province of Connacht, where a sept of the Hy Fiachrach group called O Mionachain was mentioned in 1220 by the Four Masters. They were sub-chiefs of Erris.

Early History of the Moyna family

This web page shows only a small excerpt of our Moyna research. Another 60 words (4 lines of text) covering the year 1659 is included under the topic Early Moyna History in all our PDF Extended History products and printed products wherever possible.

Another 29 words (2 lines of text) are included under the topic Early Moyna Notables in all our PDF Extended History products and printed products wherever possible.

Moyna migration to the United States +

Moyna Settlers in United States in the 19th Century

Moyna Settlers in United States in the 20th Century

Moyna Settlers in Canada in the 20th Century

Moyna Settlers in New Zealand in the 19th Century