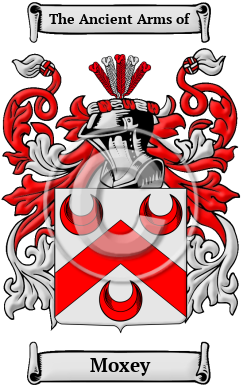 Early Origins of the Moxey family

The surname Moxey was first found in Northamptonshire at Maxey, a parish, in the union and soke of Peterborough. [1] Now part of Cambridgeshire, this ancient Saxon village dates back to c. 963 when it was known as Macuseige and literally meant "island or dry ground in marsh, of a man called Maccus" from the Viking personal name. [2]

Early History of the Moxey family

More information is included under the topic Early Moxey Notables in all our PDF Extended History products and printed products wherever possible.

Moxey migration to the United States +

Moxey Settlers in United States in the 19th Century

Moxey Settlers in United States in the 20th Century