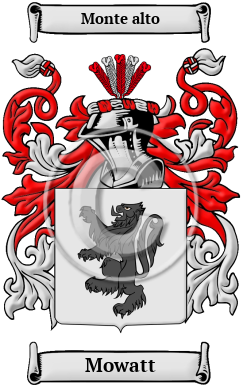 The rugged terrain and rich ancestry of Scotland forms the backdrop to the origins of Mowatt family surname. In Scotland, hereditary surnames were adopted according to fairly general rules during the late Middle Ages. The Mowatt family lived in Angus, but the origin of the surname can be traced back to Normandy where it is thought to be derived from Mont Hault which means of "high mount."

Early Origins of the Mowatt family

The surname Mowatt was first found in Angus (Gaelic: Aonghas), part of the Tayside region of northeastern Scotland, and present day Council Area of Angus, formerly known as Forfar or Forfarshire, where they were granted lands by King David I of Scotland.

Early History of the Mowatt family

This web page shows only a small excerpt of our Mowatt research. Another 157 words (11 lines of text) covering the years 1066, 1130, 1296, 1304, and 1320 are included under the topic Early Mowatt History in all our PDF Extended History products and printed products wherever possible.

Spelling variations of this family name include: Mowatt, Mouat, Mowat, Mouatt and others.

More information is included under the topic Early Mowatt Notables in all our PDF Extended History products and printed products wherever possible.

Mowatt migration to the United States +

Mowatt Settlers in United States in the 18th Century

Mowatt Settlers in Canada in the 18th Century

Mowatt Settlers in Canada in the 19th Century

Mowatt Settlers in Australia in the 19th Century

Mowatt Settlers in New Zealand in the 19th Century

Mowatt Settlers in West Indies in the 17th Century

Historic Events for the Mowatt family +