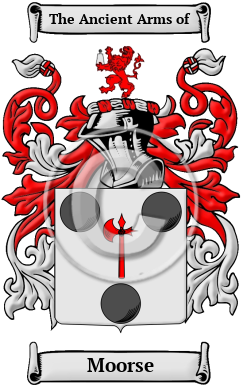 The distinguished surname Moorse emerged among the industrious people of Flanders, which was an important trading partner and political ally of Britain during the Middle Ages. As a result of the frequent commercial intercourse between the Flemish and English nations, many Flemish migrants settled in Britain. In early times, people were known by only a single name. However, as the population grew and people traveled further afield, it became increasingly necessary to assume an additional name to differentiate between bearers of the same personal name. One of the most common classes of surname is the patronymic surname, which was usually derived from the first name of the person's father. Flemish surnames of this type are often characterized by the diminutive suffix -kin, which became very frequent in England during the 14th century. The surname Moorse is derived from the Old French name Maur, which is derived from the Latin personal name Mauritius, which means Moorish or dark. Moorse is a late form of the surname. [1] [2]

Early Origins of the Moorse family

The surname Moorse was first found in Gloucestershire where, conjecturally being of Flemish origin they were one of the many settlers who were invited into England to improve the industrial capabilities of the nation. [4]

Early History of the Moorse family

More information is included under the topic Early Moorse Notables in all our PDF Extended History products and printed products wherever possible.

Migration of the Moorse family

An examination into the immigration and passenger lists has discovered a number of people bearing the name Moorse: Samuel and Elizabeth Morse settled at Dedham in Massachusetts in 1635; descended was Waldo Grant Morse of Yonkers in New York. Joseph Morse who settled in Boston Massachusetts in 1635.