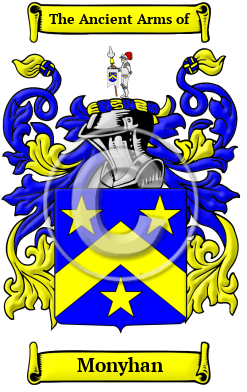 The surname Monyhan is an anglicized version of the Irish name O Muimhneachain.

Early Origins of the Monyhan family

The surname Monyhan was first found in County Mayo (Irish: Maigh Eo) located on the West coast of the Republic of Ireland in the province of Connacht, where a sept of the Hy Fiachrach group called O Mionachain was mentioned in 1220 by the Four Masters. They were sub-chiefs of Erris.

Early History of the Monyhan family

This web page shows only a small excerpt of our Monyhan research. Another 60 words (4 lines of text) covering the year 1659 is included under the topic Early Monyhan History in all our PDF Extended History products and printed products wherever possible.

A name was often recorded during the Middle Ages under several different spelling variations during the life of its bearer because literacy was rare there was no real push to clearly define any of the languages found in the British Isles at that time. Variations found of the name Monyhan include Moynihan, Minihan, Minaghan, Moynaghan, Myneghane, Minighane, Munnighane, Minihane, Minnagh, Mimnagh, Moyna and many more.

Another 29 words (2 lines of text) are included under the topic Early Monyhan Notables in all our PDF Extended History products and printed products wherever possible.

Migration of the Monyhan family

A great mass of Ireland's native population left the island in the 19th century, seeking relief from various forms of social, religious, and economic discrimination. This Irish exodus was primarily to North America. If the migrants survived the long ocean journey, many unfortunately would find more discrimination in the colonies of British North America and the fledgling United States of America. These newly arrived Irish were, however, wanted as a cheap source of labor for the many large agricultural and industrial projects that were essential to the development of what would become two of the wealthiest nations in the western world. Early immigration and passenger lists indicate many people bearing the Monyhan name: Daniel Moynihan, who was naturalized in Detroit in 1834; Timothy Minihan and his family, who immigrated to St. John, New Brunswick in 1834; James and John Moynagh, who were recorded in Nova Scotia in 1843.