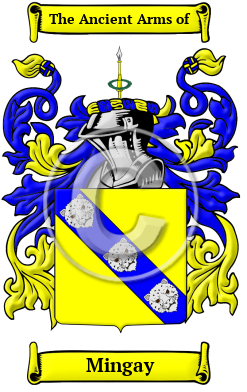 The Mingay surname is thought to come from Mengny, a Breton name derived from the words "men" meaning "stone" and "ki" meaning "dog."

Early Origins of the Mingay family

The surname Mingay was first found in East Anglia, where they are said to descend from a Mingay who was related to William the Conqueror, Duke of Normandy. The first on record are Johannes Filius Menghi c. 1154-5, listed in documents for Lincolnshire; Robertus Filius Mingghi, listed in the Cartulary of St. Mary, Clerkenwell, Essex in 1178-81; Richard Mingy listed in 1276 in the Feet of Fines of Essex; and Waryn Mingay, who was a juror at an inquest in London in 1327.

Early History of the Mingay family

Spelling variations of this family name include: Mingee, Mingy, Mingey, Mingay and others.

More information is included under the topic Early Mingay Notables in all our PDF Extended History products and printed products wherever possible.

Mingay migration to the United States +

Mingay Settlers in United States in the 17th Century

Mingay Settlers in Australia in the 19th Century

Mingay Settlers in New Zealand in the 19th Century