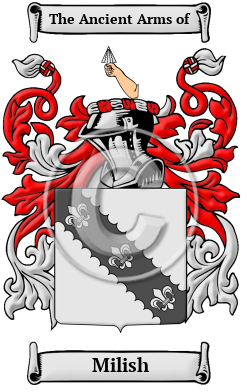 Cornwall, one of the original six "Celtic nations" is the homeland to the surname Milish. A revival of the Cornish language which began in the 9th century AD has begun. No doubt this was the language spoken by distant forebears of the Milish family. Though surnames became common during medieval times, English people were formerly known only by a single name. The way in which hereditary surnames were adopted in medieval England is fascinating. Many Cornish surnames appear to be topographic surnames, which were given to people who resided near physical features such as hills, streams, churches, or types of trees, many are actually habitation surnames. The name Milish is a local type of surname and the Milish family lived in Melhuish in Devon. The surname Milish is a habitation name that was originally derived from pre-existing names for towns, villages, parishes, or farmsteads. The surname originated as a means of identifying individuals from a particular area. In the Middle Ages people often assumed the name of the place that they originally lived as their surname during the course of travel.

Early Origins of the Milish family

The surname Milish was first found in Devon where they held a family seat from ancient times as Lords of the Manor of Melhuish in that shire, some say, well before the Norman Conquest of England in 1066 A.D. The original name of the village was Melewis. Conjecturally the family name is descended from Hugh of Rennes, holder of the village of Melhuish from Baldwin, Sheriff of Devon at the time of the taking of the Domesday Book Survey in 1086 A.D.

Early History of the Milish family

Notable amongst the family at this time was John Melhuish, an English merchant and politician, Member of Parliament for Truro, Cornwall (1554 to 1555.) In 1554 Melhuish abandoned Parliament without a licence and evaded summons to the King's Bench. For three years...
Another 41 words (3 lines of text) are included under the topic Early Milish Notables in all our PDF Extended History products and printed products wherever possible.

Migration of the Milish family

An inquiry into the early roots of North American families reveals a number of immigrants bearing the name Milish or a variant listed above: Agnes Melhuish, a convict servant sent to Virginia in 1719; William Melhuish, who came to America in 1740; Mary Melhuish, who arrived in Philadelphia in 1819.