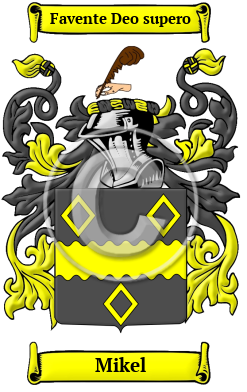 The Mikel family originally lived in the town of Mitcham in the county of Surrey, England before moving north to Scotland, and taking this name with them. In Scotland, as hereditary surnames were adopted during the late Middle Ages, names derived from localities became increasingly widespread. Local names sometimes denoted the proprietorship of the village or estate. Alternatively the name was derived from the personal name Michael, meaning "who is like God" and influenced by the Norman French to Michel and later to Mitchell. The Gaelic form of the name was MacgilleMichael. [1]

Crossmichael is a parish, in the stewartry of Kirkcudbright. "This place, which is of remote antiquity, derives its name, in old documents Corse-Michael, from the dedication of its church, which was granted to the abbey of Sweetheart, in the year 1275, by Dervorgille, wife of Allan, Lord of Galloway, and mother of John Baliol, King of Scotland. " [2]

Early Origins of the Mikel family

The surname Mikel was first found in Surrey. Although the records are vague, it is most likely that this name moved north from Durham or Yorkshire around 1130 and were one of the many families invited north by King David of Scotland when he ascended the throne. Significantly, John Michelsone had a safe conduct passage to England to conduct trading south of the border in 1395.

Meanwhile, William Michelsone held his estates in Innerkethin Scotland. The Latinization of this name at this time was Michaelis and many of the individuals are recorded in charters under this name. John Michaelis of Brechin was the rector of that place in 1464. "Robert Michael de Hyrmanston was a charter witness in 1438, John Michell had a remission granted him in 1489 for his part in holding Dumbarton Castle against the king, and John Mitsell held a land in Glasgow in 1496." [1]

Early History of the Mikel family

Another 37 words (3 lines of text) are included under the topic Early Mikel Notables in all our PDF Extended History products and printed products wherever possible.

In the United States, the name Mikel is the 11,183rd most popular surname with an estimated 2,487 people with that name. [3]

Migration of the Mikel family to Ireland

Some of the Mikel family moved to Ireland, but this topic is not covered in this excerpt.
Another 79 words (6 lines of text) about their life in Ireland is included in all our PDF Extended History products and printed products wherever possible.

Mikel migration to the United States +

Mikel Settlers in United States in the 20th Century

Mikel Settlers in Canada in the 18th Century