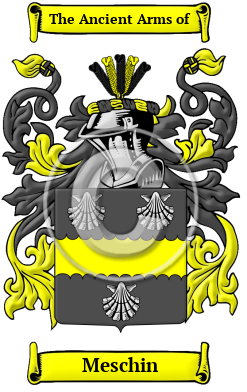 Early Origins of the Meschin family

The surname Meschin was first found in Shropshire where the family name was first referenced in the 12th century when Richard, son of Mescelin, held the estates in 1187. He is believed to be descended from William de Meschines, younger brother of Ranulph, 3rd Earl of Chester, who was descended from the Viscounts of Bessin, in the Department of Calvados in Normandy, and who held the honor of Skipton, in Yorkshire, from Richard Banistre, a Norman Baron of Cheshire who also held lands in Capite in Shropshire. Robert is mentioned as witness to a deed in 1106. There is also a vague relationship to Robert of Rhudlan, kinsman of Duke William. Richard, descendent of William, who was an under-tenant in Shropshire in 1187.

Early History of the Meschin family

Another 29 words (2 lines of text) are included under the topic Early Meschin Notables in all our PDF Extended History products and printed products wherever possible.

Migration of the Meschin family to Ireland

Some of the Meschin family moved to Ireland, but this topic is not covered in this excerpt.
Another 102 words (7 lines of text) about their life in Ireland is included in all our PDF Extended History products and printed products wherever possible.

Migration of the Meschin family