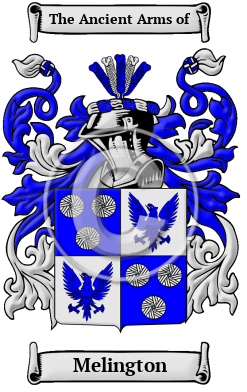 Melington is a name whose history is connected to the ancient Anglo-Saxon tribes of Britain. The name is derived from when the Melington family once lived in either of the settlements named Millington in Cheshire and the East Riding of Yorkshire, or at any farm with a mill. The surname Melington belongs to both the category of habitation names, which are derived from pre-existing names for towns, villages, parishes, or farmsteads, and the class of topographic surnames, which were given to people who resided near physical features such as hills, streams, churches, or types of trees.

Early Origins of the Melington family

The surname Melington was first found in Cheshire at Millington, a civil parish or at Millington, a small village and civil parish in the East Riding of Yorkshire. Both were listed in the Domesday Book of 1086. The Cheshire parish was listed as Mulintune and at that time was held by William Malbank. Rather small, it had land enough for one plough. However the Yorkshire listings were spelt Mileton, Milleton and Milletone and each had their own entry. [1] These have evolved into the modern day places of Millington Woods, Millington Pastures and Millington Springs. The place name literally means "farmstead with a mill" having derived from the Old English myln + tun. [2]

Early History of the Melington family

This web page shows only a small excerpt of our Melington research. Another 89 words (6 lines of text) covering the years 1598, 1666, 1628 and 1703 are included under the topic Early Melington History in all our PDF Extended History products and printed products wherever possible.

Sound was what guided spelling in the essentially pre-literate Middle Ages, so one person's name was often recorded under several variations during a single lifetime. Also, before the advent of the printing press and the first dictionaries, the English language was not standardized. Therefore, spelling variations were common, even among the names of the most literate people. Known variations of the Melington family name include Millington, Milington, Mellington and others.

Distinguished members of the family include Gilbert Millington (ca. 1598-1666) English barrister, one of the Regicides of King Charles I of England, after the Restoration, he was sentenced to death, but was later...
Another 32 words (2 lines of text) are included under the topic Early Melington Notables in all our PDF Extended History products and printed products wherever possible.

Migration of the Melington family

For political, religious, and economic reasons, thousands of English families boarded ships for Ireland, Canada, the America colonies, and many of smaller tropical colonies in the hope of finding better lives abroad. Although the passage on the cramped, dank ships caused many to arrive in the New World diseased and starving, those families that survived the trip often went on to make valuable contributions to those new societies to which they arrived. Early immigrants bearing the Melington surname or a spelling variation of the name include: Joan Millington and her husband, who settled in Virginia in 1650; John Millington was a servant and settled in Barbados in 1680; Nathaniel Millingtons settled in Maryland in 1774.