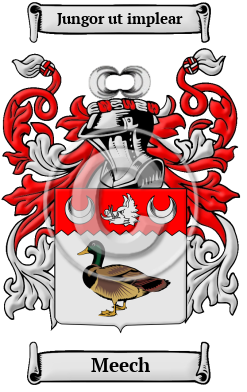 The people known in ancient Scotland as the Picts were the ancestors of the first to use Meech as a name. It was a name for a timid person. Meech is a nickname, which belongs to the category of hereditary surnames. Nicknames form a broad and miscellaneous class of surnames, and can refer directly or indirectly to one's personality, physical attributes, mannerisms, or even their habits of dress. The surname Meech comes from the Old English word meek, which means humble or merciful. [1] [2] [3]

Early Origins of the Meech family

The surname Meech was first found in Fife, where "a family of this name held lands from the abbots of Cupar from the middle of the fifteenth century. William Mek had a tack of part, of Cowbyr in 1457, Will Meyk was tenant of Coupergrgange in 1468, and William Meyk was tenant of Balmyl in 1485." [4]

Further south in England, Richard Mek was registered in Somerset in 1299 and later, Robert le Meke was listed as a Freeman of York in 1300. [5]

Early History of the Meech family

In medieval Scotland, names were more often spelled according to sound than any regular set of rules. An enormous number of spelling variations were the result. Over the years, the name Meech has been spelled Meek, Meeke, Meeks, Meik, Meech, Meach, Mekie and others.

More information is included under the topic Early Meech Notables in all our PDF Extended History products and printed products wherever possible.

Migration of the Meech family to Ireland

Some of the Meech family moved to Ireland, but this topic is not covered in this excerpt.
Another 76 words (5 lines of text) about their life in Ireland is included in all our PDF Extended History products and printed products wherever possible.

Meech migration to the United States +

In such difficult times, Ireland, Australia, and North America looked like better homes for many Scots. The trips were expensive and grueling, but also rewarding, as the colonies were havens for those unwelcome in the old country. That legacy did not die easily, though, and many were forced to fight for their freedom in the American War of Independence. The Scottish legacy has resurface in more recent times, though, through Clan societies, highland games, and other organizations. Immigration and passenger lists have shown many early immigrants bearing the old Scottish name of Meech:

Meech Settlers in United States in the 17th Century

Meech Settlers in United States in the 20th Century

Meech Settlers in Australia in the 19th Century

Meech Settlers in New Zealand in the 19th Century

Motto: Jungor ut implear
Motto Translation: I am joined that I may become full.