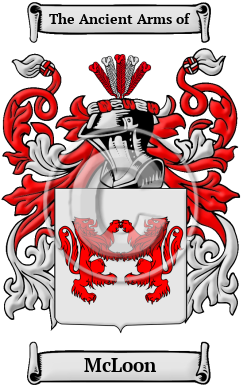 Early Origins of the McLoon family

The surname McLoon was first found in Munster, where they held a family seat as being directly descended through the O'Briens, the Clancys from King Brian Boru, who died at Clontarf in 1014. The English and Scottish influence on Irish history after the Norman Conquest of England almost equaled the enormous Irish culturaL impact on their own history long before the Conquest from the 1st to 7th centuries. Many clans, tribal names were intermixed and family groupings became almost indistinguishable.

Early History of the McLoon family

This web page shows only a small excerpt of our McLoon research. Another 90 words (6 lines of text) are included under the topic Early McLoon History in all our PDF Extended History products and printed products wherever possible.

More information is included under the topic Early McLoon Notables in all our PDF Extended History products and printed products wherever possible.

Migration of the McLoon family

Some of the first settlers of this family name or some of its variants were: Andrew McGlone, who arrived in Philadelphia in 1772; Charles McGlone, who was recorded in New York City in 1799; and Bridget McGloin, who came to New York in 1817. Many of the name McGloin arrived in Texas in 1829.