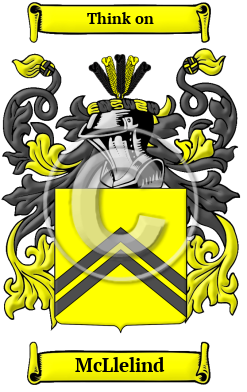 A people of the Scottish/English Borderlands known as the Strathclyde Britons were the first to use the name McLlelind. It is derived from the son of the servant of Fillan. Fillan is derived from the word fail which means wolf. In Gaelic, the name was spelled Mac Gill Fhaolain

Early Origins of the McLlelind family

The surname McLlelind was first found in the former counties of Kirkcudbrightshire and Galloway where Chief Duncan MacLellan appears in a charter of Alexander II in 1217. Other early records of the surname include Gilbert M'Lolane, who lived around the year 1270. Gilbert's son Patrick, along with several others, took the castle of Dumfries from the supporters of Robert the Bruce in around 1305. Gilelbertus MacLelan was elected Bishop of Man and the Sudreys in 1325 and held the position for almost 3 years.

Early History of the McLlelind family

Spelling and translation were hardly exact sciences in Medieval Scotland. Sound, rather than any set of rules, was the basis for spellings, so one name was often spelled different ways even within a single document. Spelling variations are thus an extremely common occurrence in Medieval Scottish names. McLlelind has been spelled MacClelland, McClellan, MacLellan, McLellan, MacLelland, McLelland, MacClelland, McClelland, Clelland and many more.

Notable amongst bearers of this family name during their early history was Sir William Maclellan of Bombie, knighted by King James IV of Scotland, who fought for the king in the losing Battle of Flodden Field in 1513. According to folklore, McLellan threw his gauntlet at the king's feet, shook his fist and...
Another 53 words (4 lines of text) are included under the topic Early McLlelind Notables in all our PDF Extended History products and printed products wherever possible.

Migration of the McLlelind family to Ireland

Some of the McLlelind family moved to Ireland, but this topic is not covered in this excerpt.
Another 96 words (7 lines of text) about their life in Ireland is included in all our PDF Extended History products and printed products wherever possible.

Migration of the McLlelind family