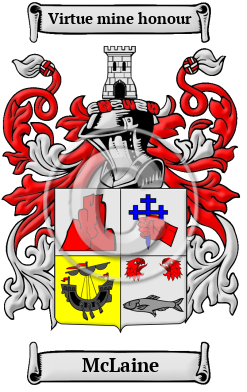 On the Scottish west coast, the McLaine family was born among the ancient Dalriadan clans. The surname is an Anglicized form of the Gaelic Mac Gille Eathain, a patronymic name meaning "son of the servant of Saint John." The Clan is descended from Eachan Reaganach, (brother of Lachlan the progenitor of the Macleans of Duart). These two brothers were both descended from Gilleathain na Tuaidh, known as 'Gillian of the Battleaxe', a famed warrior of the 5th century. Eachan, or Hector was given the lands of Lochbuie from John, the first Lord of the Isles, some time in the 14th century.

Early Origins of the McLaine family

Early History of the McLaine family

Migration of the McLaine family to Ireland

Some of the McLaine family moved to Ireland, but this topic is not covered in this excerpt.
Another 67 words (5 lines of text) about their life in Ireland is included in all our PDF Extended History products and printed products wherever possible.

McLaine migration to the United States +

McLaine Settlers in United States in the 18th Century

McLaine Settlers in United States in the 19th Century

McLaine Settlers in Australia in the 19th Century