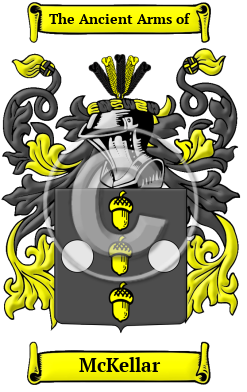 Among the the peoples of ancient Scotland, the first to use the name McKellar were the Strathclyde- Britons. McKellar was a name for someone who lived in the lands of (Easter and Wester) Keilor in the adjoining parishes of Newtyle and Kettins in Angus. The names are still common in the district. [1]

Early Origins of the McKellar family

The surname McKellar was first found in Angus (Gaelic: Aonghas), part of the Tayside region of northeastern Scotland. "Stephen de Cellar [was] burgess of Roxburgh, 1262. Duncan de Cellario, burgess of Peril 1292 is doubtless Dunkan del Celer, burgess of Perth, who rendered homage in 1296." [1]

The MacKellar variant with its various spellings is in "Gaelic Mac Ealair, 'son of Ealair,' the Gaelic form of Latin Hilarius, the name of the bishop of Poitiers, commemorated in the Felire of Oengus at 13 January. " [1]

Early History of the McKellar family

Medieval Scottish names are rife with spelling variations. This is due to the fact that scribes in that era spelled according to the sound of words, rather than any set of rules. McKellar has been spelled Keller, Kellar, Keeler, Keilor, Keiler, Keillor, Keiller, Kelour, MacKeller and many more.

Notable amongst the family at this time was Godfrey Keller (d. 1704), musical theorist and harpsichord player, was born in Germany, but settled in London towards the end of the seventeenth century as professor and composer. He died in November 1704, leaving a widow and two sons. To the elder, Godfrey, he bequeathed his ‘best fiddle’ and spinet. [2] Mary MacKellar (1834-1890), highland poetess, daughter of Allan Cameron, baker at Fort William, was born on 1 Oct. 1834. She married early John Mackellar, captain and joint-owner of a coasting vessel, with...
Another 90 words (6 lines of text) are included under the topic Early McKellar Notables in all our PDF Extended History products and printed products wherever possible.

In the United States, the name McKellar is the 7,472nd most popular surname with an estimated 4,974 people with that name. [3]

Migration of the McKellar family to Ireland

Some of the McKellar family moved to Ireland, but this topic is not covered in this excerpt.
Another 34 words (2 lines of text) about their life in Ireland is included in all our PDF Extended History products and printed products wherever possible.

McKellar migration to the United States +

McKellar Settlers in United States in the 18th Century

McKellar Settlers in United States in the 19th Century

McKellar Settlers in Australia in the 19th Century

McKellar Settlers in New Zealand in the 19th Century