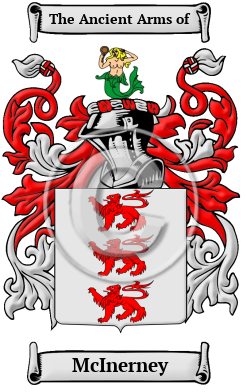 The many Irish surnames in use today have long rich histories behind them. The name McInerney originally appeared in Gaelic as Mac an Airchinnigh, which means son of the erenagh. The word erenagh refers to a steward of church lands. This was originally an ecclesiastical task, but was later performed by laymen, becoming a hereditary trade. [1]

Early Origins of the McInerney family

The surname McInerney was first found in County Clare (Irish: An Clár) located on the west coast of Ireland in the province of Munster, where the MacInerny variant prevails.

The McEneany variant is "the name of two septs. That Co. Roscommon is almost extinct; that of Oriel is numerous under many variants. A study of this name which appeared in the Clogher Record (1960) presents evidence (which I have verified elsewhere) to prove that its Irish form is not the generally accepted Mac Conaonaigh but Mac an Dhéaghanaigh, earlier Mac an Déaganaigh." [1]

"MacAneany, also written MacEneany and sometimes MacNeany, was changed to Bird by some families in County Monaghan, Louth and Meath." [2]

Early History of the McInerney family

This web page shows only a small excerpt of our McInerney research. Another 214 words (15 lines of text) covering the years 1172, 1365, 1393, 1398 and 1659 are included under the topic Early McInerney History in all our PDF Extended History products and printed products wherever possible.

Irish names recorded during the Middle Ages are characterized by many spelling variations. This preponderance of variations for common names can be explained by the fact that the scribes and church officials that kept records during that period individually decided how to capture one's name. These recorders primarily based their decisions on how the name was pronounced or what it meant. Research into the name McInerney revealed many variations, including MacInerny, MacInerney, Nerney, Kinnerk, Nerheny, Nertney, Nirney, McNertney, MacNertney, MacNerney and many more.

More information is included under the topic Early McInerney Notables in all our PDF Extended History products and printed products wherever possible.

McInerney migration to the United States +

Many Irish families boarded ships bound for North America in the middle of 19th century to escape the conditions of poverty and racial discrimination at that time. Although these immigrants often arrived in a destitute state, they went on to make important contributions to the emerging nations of the United States and Canada. An inquiry into many immigration and passenger lists has revealed many early immigrants to North America bearing the McInerney family name:

McInerney Settlers in United States in the 19th Century

McInerney Settlers in Canada in the 19th Century

McInerney Settlers in Australia in the 19th Century

McInerney Settlers in New Zealand in the 19th Century

Historic Events for the McInerney family +