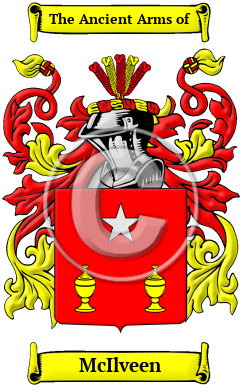 Early Origins of the McIlveen family

The surname McIlveen was first found in Dumfries where Thomas Makgilvane was a tenant under Douglas in the barony of Buittle in 1376. The name was derived from the Gaelic Mac Gille Bheathain, meaning 'son of the servant of S. Beathin' (Bean). There are many spelling variations of the name due to the English translation from Gaelic. John Mcilmeyne was a witness in Dumfries in 1477 and Gilbert Makilmeyn de Grummat was listed here in 1503. [1]

Early History of the McIlveen family

More information is included under the topic Early McIlveen Notables in all our PDF Extended History products and printed products wherever possible.

Migration of the McIlveen family to Ireland

Some of the McIlveen family moved to Ireland, but this topic is not covered in this excerpt.
Another 191 words (14 lines of text) about their life in Ireland is included in all our PDF Extended History products and printed products wherever possible.

McIlveen migration to the United States +

McIlveen Settlers in United States in the 19th Century

McIlveen Settlers in United States in the 20th Century